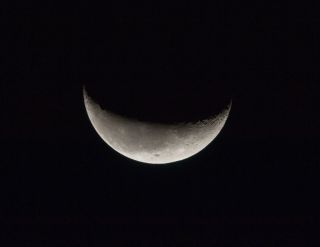 A waning crescent moon is featured in this image photographed by an Expedition 24 crew member on the International Space Station.
(Image: © NASA)

For expert skywatchers as well as those who are just beginning, the moon is an ever-alluring target.

When is the best time to observe the moon with a telescope?

Most astronomy neophytes might say the best time is when the moon is at full phase, but that's probably the worst time. When the moon is full, it tends to be dazzlingly bright as well as flat and one-dimensional in appearance.

In contrast, the interval when the moon is at or just past first quarter phase, or at or just before last quarter phase, is when we get the best views of the lunar landscape right along the sunrise-sunset line, or terminator. (The terminator can also be defined as that variable line between the illuminated portion and the part of the moon in shadow.)

Along with the fact that a half moon offers more viewing comfort to the eye than a full moon does, using a telescope with just small optical power (magnifications of 20- to 40-power) or even good binoculars allows us to see a wealth of detail on the surface. Around those times when the moon is half-lit or in its gibbous phase, those features lying close to the terminator stand out in sharp, clear relief. [Photos: Full Moon Captivates Skywatchers in February 2012]

The moon next arrives at first quarter phase on Leap Day: Wednesday (Feb. 29) at 8:21 p.m. EST. That will be the moment when its disk is exactly 50 percent illuminated. Lunar mountains will be visible as the sun lights them from the right.

How does the moon's brightness compare now with full phase? Most would probably think it's half as bright, but in reality astronomers tell us that the first quarter moon is only one-eleventh as bright as full. This is due to the fact that a half moon is heavily shadowed, even on its illuminated half. And believe it or not, it isn't until just 2.4 days before full that the moon actually becomes half as bright as full.

In contrast to a half moon, a full moon is almost completely illuminated, especially right around its center, where the sun shines straight down into all the microscopic crevices. Except for perhaps around the moon's immediate edges, you will find no shadows at all.

Have you ever noticed that when artists portray the moon, they seem to show it as either a slender crescent or full? Half moons are shown far less frequently, while gibbous moons are rarely depicted at all. The word "gibbous" is derived from the Latin word gibbus, meaning "hump." An unusual word to be sure, but in describing the moon between half and full, it's the correct term.

Yet interestingly, the gibbous moon is the most-seen phase, occurring for the half month between first and last quarter. (For many, it will look "full" for the two or three nights around the time of full moon.)

Because it is in the sky for more than half the night, we're more apt to see the gibbous moon. In fact, it is even visible during the daytime hours, as will be the case during this upcoming week in mid- or late afternoon.

In contrast, the oft-pictured crescent moon is visible only during the early evening or early morning, and sometimes only briefly.