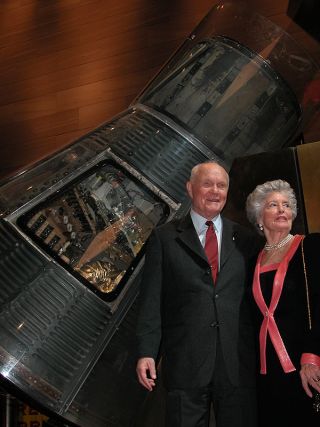 Former Senator John Glenn with his wife Annie as photographed standing next to Glenn's Mercury spacecraft, Friendship 7, at the National Air and Space Museum in Washington, DC on Feb. 20, 2002.
(Image: © collectSPACE.com/Robert Z. Pearlman)

He wasn't the first person in space, nor the first American. He wasn't even the first person to orbit the planet. But Glenn's five-hour flight onboard Friendship 7 set him apart from the space travelers who launched before him and established a lasting legacy that outshone many of those who followed.

Not that Glenn understands the fascination or can explain why.

"I really cannot answer that," Glenn told collectSPACE.com a week before his Mercury-Atlas 6 flight's 50th anniversary. "I think maybe, that it kind of started off perhaps by the fact that it was sort of an 'on-again, off-again' flight. Well, let me back up a little bit..."

Glenn, now 90, was chosen in April 1959 to be one of the United States' first astronauts. Three years later, he was the pilot for the first orbital spaceflight by an American, following two orbital flights by Soviet cosmonauts and two suborbital launches by his fellow Mercury astronauts.

"It was a pretty good jump," said Glenn of the transition from the 15-minute U.S. suborbital missions that preceded his. "I do not want to expand it to more than it was, but those flights of course, did not get up to orbital speed, the two flights ahead of mine. Mine got up to orbital speed and then had to come back in and make a re-entry from orbital speed, and so that was a major difference."

"And the time in weightlessness extended of course, a lot. The flight was four hours and 55 minutes, so it gave three orbits — about an hour and 29 minutes for each orbit," he said.

Before he could launch into the history books however, he first needed to get off the ground, a trial that Glenn also attributes to launching his legacy. [Photos: John Glenn's Space Legacy]

"I went on the 11th scheduled date," Glenn said. "I only suited up four times, but twice I was on top of the [launch] vehicle — once for about six hours, ready to go and then they had to cancel because of weather. The other time was [due to] equipment."

"So when I finally did go, this had been several months of on-again, off-again, on-again, one problem after another. I think when we finally went, there was a big sigh of relief. Because it was [openly publicized] and because the press covered it completely, I think there was a world interest in it," he said.

"And I think that was some of the reason why so much attention was paid to it back then. It sort of started things going as it has ever since," Glenn said.

In the 50 years since he first flew, Glenn served as a U.S. Senator and in 1998, returned to space aboard the shuttle Discovery. At age 77, he set a new record as the oldest person to reach orbit.

The legacy of his Mercury flight however, continues to live on in pop culture.

"I think the duration that people have been interested in that, the first flight back then, has been somewhat of a surprise," Glenn said. "We are so used to the new and the untried in this country, that I think we have gotten used to that. So it has been a little bit of a surprise that attention has been and keeps coming back to some of those very early flights."

Glenn and his 1962 flight has been celebrated and cited in movies and music, appeared on postage stamps and on magazine covers, and has been commemorated through a long line of memorabilia and collectibles released to the public over the half-century since. The latter even helped inspire at least one person to follow in Glenn's footsteps to space.

"One of my fondest memories of John Glenn's flight came from a box of Red Ball Jets," Don Pettit, one of two NASA astronauts now on board the International Space Station (ISS), told collectSPACE. "Red Ball Jets were a particular brand of tennis shoes that kids loved to wear. They had a little red sticker on the side that would fall off after about the first week, but they were really cool shoes."

"In this particular box of Red Ball Jets was one of these really flimsy vacuum formed records. And that record was a soundtrack recording of John Glenn describing what the Earth looked like during one of his orbits. I remember that as a kid," Pettit said.

Continue reading at collectSPACE.com to learn what John Glenn thinks is the potential still waiting for astronauts in Earth orbit.