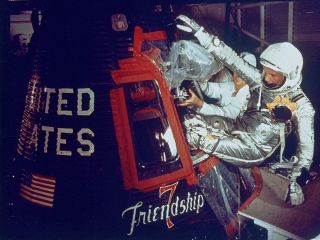 Fifty years after it first launched an astronaut on a trip around the Earth, NASA finds itself in need of a new generation of spaceships.

On Feb. 20, 1962, John Glenn made the United States' first orbital spaceflight, zipping around our planet three times in his Friendship 7 capsule before splashing down safely in the Atlantic Ocean. The mission put the nation on even footing with the Soviet Union, which had first pulled off the feat in April 1961.

As it celebrates the 50th anniversary of Glenn's historic flight, which helped propel NASA toward unprecedented accomplishments in human spaceflight, the agency lacks the ability to replicate his achievement.

Since NASA's space shuttle fleet retired in July 2011, the U.S. now depends on Russia — its former space race rival — to transport American astronauts to and from low-Earth orbit. It's an irony that is not lost on Glenn.

"Now we have to contract with the Russians, unseemly though it may be for the world's greatest spacefaring nation," Glenn said Friday (Feb. 17) during a NASA event commemorating his flight. "I think it's too bad." [Photos: John Glenn's Historic Flight]

Glenn's flight and that of Scott Carpenter, who launched on his own orbital mission in May 1962, brought NASA key momentum after several years of Soviet space dominance.

"They gave us a double whammy in those days," Carpenter said. "Not only did they get the honor of the first man in space, but they sent him not into ballistic flight but orbital flight."

The fact that NASA responded with manned orbital missions of its own in 1962 provided a vital boost to the U.S. space program and the national psyche, Carpenter said. The flights set NASA on a path toward meeting President John F. Kennedy's goal of landing an astronaut on the moon by the end of the decade.

"I think these flights gave the nation the knowledge that, although we were behind the Soviet Union in our progress, that we were able to overtake them and do exactly what Kennedy told us to do, and that in so doing we would beat the Russians to the moon," Carpenter said. "And that's what we did." [Gallery: 45 Apollo Moon Mission Photos]

"It was a time of head-on-head superpower rivalries for global leadership," space policy expert John Logsdon, professor emeritus at George Washington University in Washington, D.C., told SPACE.com. "Everyone was recovering from World War II, and it was a very tense time in U.S.-Soviet relations. Having something positive happen, particularly in an area where the Soviet Union looked like it was ahead, was politically very important."

NASA channeled that momentum into a series of successes in human spaceflight. Over the years, the space agency has executed six manned moon landings, launched 135 space shuttle missions and helped build the $100 billion International Space Station.

But now, a half-century after Glenn's flight, NASA lacks a way to get astronauts off the ground.

In 2004, President George W. Bush directed the agency to retire its space shuttle fleet by 2010; the iconic space plane hung around for one extra year, flying its last mission in July 2011. Now the U.S. depends on Russian Soyuz vehicles to take its astronauts to the station and back.

NASA is encouraging American private spaceflight firms to take over this taxi role eventually, through its Commercial Crew Development (CCDev) program. The space agency had originally hoped the first commercial vehicles would come online by 2015, but recent congressional cuts to CCDev funding have helped push that estimate back to 2017.

Meanwhile, NASA is working to develop a transportation system for manned journeys to deep-space destinations, in accordance with President Barack Obama's directive to send an astronaut to an asteroid by 2025 and then on to Mars by the mid-2030s.

NASA hopes this new architecture — a heavy-lift rocket called the Space Launch System and a capsule known as the Orion Multi-Purpose Crew Vehicle — is operational by late 2021.

Neither Glenn nor Carpenter is happy that the U.S. currently lacks a way to get astronauts to space. In his remarks Friday, Glenn blamed the Bush Administration for its decision to retire the shuttle without having a viable replacement lined up.

Carpenter cast a wider net, saying the nation as a whole has ceased to prioritize human spaceflight.

"I think that we're going to be able to take care of safely desiging and flying a spacecraft. The industry in this country is able to do that," Carpenter said. "What I deplore is the fact that we've lost our national resolve to do it, and that's reflected in the amount of money not given to NASA. It's reflected in depriving NASA of a mission."

"When John and I went to work for this country and NASA, the United States was recognized around the world as a can-do nation," Carpenter added. "And because of all of these various reasons, we have become viewed around the planet as a can't-do nation. And I deplore that."