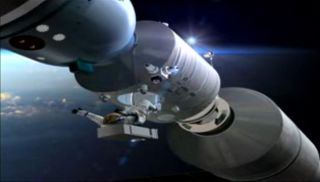 China's next space mission will launch three astronauts to a prototype space station module orbiting high above Earth, possibly in June, according to state media reports.

The mission is slated to launch sometime between June and August atop a Long March 2F rocket, the Xinhua news agency reported Friday (Feb. 17).  The mission, which will be China's fourth manned spaceflight, will send a crew into orbit aboard the Shenzhou 9 spacecraft to rendezvous with the country's prototype space station module Tiangong 1.

China launched the Tiangong 1 space lab into orbit in September 2011. An unmanned space docking test followed soon after, with the robotic Shenzhou 8 spacecraft successfully linking up with the orbital space lab in November.

Unlike the Shenzhou 8 mission, the manned Shenzhou 9 flight will demonstrate a manual space docking, according to Xinhua. The three-person crew will then stay aboard to live, work and perform science experiments.

China's manned spaceflight program has also stated plans to launch another mission, called Shenzhou 10, to Tiangong 1 this year. Chinese space officials have also hinted that China's first female astronaut may fly on one of the missions to Tiangong 1.

China plans to build a larger, 60-ton space station by 2020 and fly a manned mission to the moon sometime after that.

Since the dawn of human spaceflight in 1961, only three countries have developed vehicles capable of launching astronauts into space and returning them to Earth. Russia and the United States began launching humans into space in 1961. China's first manned spaceflight blasted off in 2003.