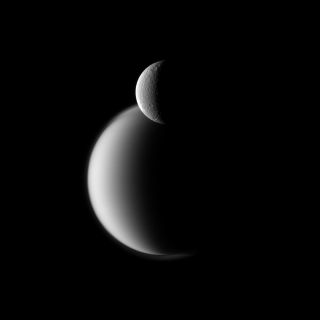 Craters appear well defined on icy Rhea in front of the hazy orb of larger Titan in this view of the two Saturn moons. NASA's Cassini spacecraft snapped the photo on Dec. 10, 2011.
(Image: © NASA/JPL-Caltech/Space Science Institute)

The image shows the heavily cratered Rhea in the foreground, while the hazy orb of the huge moon Titan looms in the distance. Cassini snapped the new Saturn moon photo in visible green light on Dec. 10, 2011, and it was released to the public on Monday (Feb. 13).

Cassini was about 808,000 miles (1.3 million kilometers) from Rhea and 1.2 million miles (2 million km) from Titan when it took the picture, researchers said.

Titan is the largest of Saturn's many satellites; at 3,200 miles (5,150 km) in diameter, it's nearly 50 percent wider than Earth's moon. The only moon in our solar system larger than Titan is Ganymede, which orbits Jupiter.

Titan has a thick, nitrogen-rich atmosphere that shrouds the frigid body in a soupy brown shroud. Complex organic molecules — the carbon-containing building blocks of life as we know it — swirl about in this atmosphere.

The huge moon also has a hydrocarbon-based weather system, with methane rain falling from the sky and pooling in liquid-methane lakes. Astrobiologists speculate that Titan may be one of the best places in the solar system to search for life beyond Earth.

Rhea is Saturn's second-largest moon, but it's a shrimp compared to Titan, measuring just 949 miles (1528 km) across. As the new photo shows, Rhea's icy surface is battered and pocked with many craters.

Like Titan, Rhea has an atmosphere. But Rhea's is very different; it's much wispier and composed primarily of oxygen and carbon dioxide.

Researchers think the oxygen comes from Rhea's surface ice, liberated from water molecules that get blasted apart by charged particles streaming from Saturn's magnetosphere. The source of the carbon dioxide, however, is more mysterious.