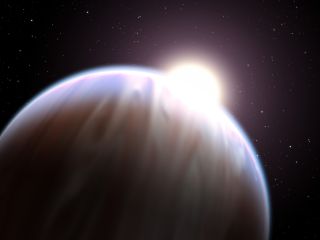 Planets with sizable tilts on their spin-axes should have extreme seasonal temperatures.
(Image: © NASA)

If you think summer is too hot or winter unbearably cold, take solace that in the distant past seasons on our planet might have been much harsher. However, the advent of milder seasons did more than offer comfort, some scientists suggest.

Subdued seasonality might be linked to the emergence of complex life on Earth around 600 million years ago. On alien worlds, extreme seasonal spikes and plunges in temperature could likewise determine whether life teems, scrapes by, or dies.

Seasons arise when the axis of a planet's spin is tilted relative to the plane of the planet's orbit. Recent research has suggested that a loss of axial tilt and its attendant seasonality, which helps moderate global temperatures, could doom extraterrestrial creatures. Scientists are also considering the opposite case: worlds where blazing summers and devastatingly frigid winters make the development of life with any complexity a long shot.

"Axial tilt, or obliquity, is a crucial parameter for climate and the possible habitability of a planet," said René Heller, a postdoctoral research associate at the Leibniz Institute for Astrophysics in Potsdam, Germany. Heller was the lead author on two papers last year on obliquity loss due to tidal interactions on habitable planets around red dwarf stars.

Many phenomena influence obliquity over a planet's history. Major examples include the impacts of large cosmic bodies, as well as the gravitational pulls from companion planets and central stars. Over the course of a year on a tilted planet, varying amounts of warming sunlight strike the northern and southern hemispheres.

The Earth presently has an obliquity of about 23.5 degrees. Along with daily rotations, this moderate obliquity ensures that the temperature differences between the coldest polar and hottest desert regions are not too extreme. [Photos: The Strangest Alien Planets]

Unlike our planet, another world with a low axial tilt of no more than a few degrees would not experience much seasonality. The colder poles would lead to a narrower habitable region, and if coupled with a too-hot equator could render the world a difficult place for complex life. It is an even grimmer picture for high-obliquity planets in a planetary system's "Goldilocks" zone, the orbital band where water can stay in liquid form on a world's surface.

Take the case of an Earth-like planet with an obliquity close to that of Uranus, about 90 degrees. The north pole would point at the central star for a quarter of the year and then directly away for another quarter.

"Your northern pole will be boiled during part of the year while the equator gets little sunlight," said Heller. Meanwhile, "the southern pole freezes in total darkness." Essentially, the conventional notion of a scorching hell dominates one side of the planet, while an ultra-cold hell like that of Dante's Ninth Circle prevails on the other.

Then, to make matters worse, the hells reverse half a year later. "The hemispheres are cyclically sterilized, either by too strong irradiation or by freezing," Heller said.

Life – always resilient – could still find ways to persist on planets that spin on their "sides," Uranus-style. Maybe migrating critters could follow a survivable, fast-shifting climatic zone while others find refuge at the equator. Hardy organisms might just ride out the temperature extremes. Examples of these rugged creatures right here on Earth, mostly bacteria, are known naturally enough as "extremophiles."

A class of these organisms, called thermophiles, thrives in hot springs and in the lightless oceanic depths around hydrothermal vents. The species Methanopyrus kandlerican reproduce in high-pressure waters hotter than 250 degrees Fahrenheit. On the other end, psychrophiles grow in ice-covered cavities of briny seawater down to 5 degrees Fahrenheit.

When conditions get too hot or cold, sporulating bacteria go into stasis, encasing themselves in tough structures called endospores. The microorganisms can lie dormant in ice for millions of years and upon thawing go right back to replicating.

For more than the simplest biota, such feats of durability would surely pose a lot of challenges on exoplanets with higher obliquity than Earth's, though far less than that of Uranus.

"Perhaps an obliquity of just 40 degrees would be tough for complex animals due to the very hot summers and cold winters that would affect much of the globe," noted George Williams, a geologist at the University of Adelaide in Australia. [Extremophiles: World's Weirdest Life]

Climatic conditions of this very sort might have held back the evolution of big and diverse creatures on our planet, Williams suggests. Prior to about 580 million years ago, scientists think most of earthly life consisted of microscopic algae and bacteria. Complex animals such as jellyfish and worms arrived on the scene thereafter. Then, starting about 540 million years ago, in what is known as the Cambrian explosion, life went nuts. All sorts of intricate body types sporting spines, shells, eyes, legs and more suddenly show up in the fossil record.

Could Earth have once possessed a high obliquity? Computer models say yes. The cataclysmic impact with a Mars-sized body 4.5 billion years ago, thought to have created the moon, could have knocked Earth's spin axis well off-kilter from the plane of the planet's orbit. Intriguingly, some geological evidence is consistent with Earth having a high obliquity for much of its history, up until about 600 million years ago.

Glaciers provide crucial information in this regard. As shown by numerous geophysicists headed by Phil Schmidt at the Commonwealth Scientific and Industrial Research Organisation in Australia, glaciers used to form preferentially in formerly low latitudes. (Somewhat counterintuitively, an obliquity exceeding 54 degrees renders the equator cooler than the poles, on average.)

Magnetic directions fixed in glacial deposits have revealed this ancient icy activity. Associated sand-wedge structures, like those that occur in modern-day polar regions, suggest big seasonal temperature fluctuations as well. From winter to summer near the former equator, temperatures varied in excess of 100 degrees Fahrenheit. If that were to occur today, blizzards could dump snow on the Amazon rainforest.

Geological markers of high obliquity peter out around the so-called Precambrian–Phanerozoic boundary. After this time, significant glaciations occurred in just the high latitudes, and life took off.

"There seems to have been a dramatic improvement in the habitability of the Earth at around the Precambrian–Phanerozoic boundary," Williams said. "I have suggested that reduction of obliquity was the main cause of this major change in habitability." Models of the Earth's climate with a high obliquity by atmospheric physicist Gregory Jenkins at Howard University buttress this idea.

Of course, many other explanations have been offered for the Cambrian explosion, though each has its drawbacks. Ideas include a greater concentration of atmospheric oxygen or calcium or phosphorous in seawater, or even the evolution of eyes jumpstarting biodiversity.

Williams' hypothesis has its own big gap: a mechanism that could have clipped the planet's tilt by about 30 degrees in 100 million years prior to the Earth's oldest confirmed circumpolar glaciation. Research into the history of tectonic processes within the Earth and gravitational interaction with the moon may illuminate the matter.

At this point in exoplanetary research, very little is known about the characteristics of most alien worlds beyond their size, mass and orbital period. Discerning axial tilts and the effect they have on planetary habitability will be an important aspect of the search for alien life in the decades ahead.

It could turn out that Earth's obliquity of 23.5 degrees, like its orbital distance from the Sun, is a "Goldilocks" figure for seasonality – not too extreme in either direction – and therefore ideal for complex life.

"Obliquities of bodies in the solar system have been studied extensively," said Heller. "But with exoplanets we are entering new territory."