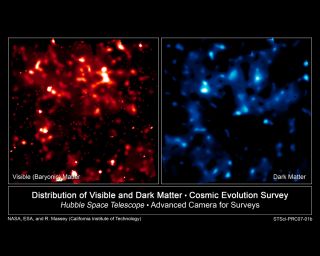 This false-color image, taken by the Hubble Space Telescope, compares the distribution of normal matter (red, left) to that of dark matter (right, blue). Dark matter makes up most of the matter of the universe, but can be viewed only by its gravitational effects. The HST’s ability to capture the warping of space helped scientists to measure the distribution of dark matter. Astronomers think dark matter could have powered the first stars.
(Image: © NASA, ESA, and R. Massey (California Institute of Technology))

Some of the universe's earliest stars are too distant to see, but whether their fiery cores are fueled by dark matter could be determined by the glow surrounding them, scientists say.

If this elusive matter does power these stars, current infrared telescopes should be able to spot the resulting light, and the light signatures would differ from those of stars, like our sun, that rely on fusion.

Dark matter has never been detected directly and can be studied only by its gravitational effects on visible bodies. But its dominating presence – it is thought to compose 96 percent of the universe – could have played a significant role in the creation of the first stars, researchers say.

These dark-matter-powered stars, or dark stars, shine brightly regardless of their name. And although the individual starlight would be too distant to measure, astronomers can learn much from looking at the combined light of the universe's earliest stars, including those powered by dark matter. [Infographic Gallery: The History and Structure of the Universe]

In a new study, a team of astronomers calculated the amount of light that dark stars would produce and determined that their glow should be visible in infrared wavelengths, detectable to current telescopes.

Glow from the city

Stellar luminosity, combined with light produced by galaxies, creates a halo of light similar to the diffuse glow above a city from many individual lamps. By studying this general shine, scientists aim to understand more about its individual sources of light.

In the city analogy, scientists could compare the total light expected if all of its sources were dim streetlights, rather than bright floodlights, enabling them to put limits on the minimum and maximum properties of each bulb.

For these ancient stars, astronomers similarly have constrained properties such as the relationship between mass and brightness, how long a star might be fueled by dark matter, and star-formation rates. [Video: Dark Matter in 3D]

Because it takes so long for light to travel vast distances, the farthest astronomical objects we detect are generally the oldest. By focusing on the glow produced by these old, distant sources, astronomers can effectively examine the extragalactic background light produced by the first stars.

"Since it is not possible to study star formation in the early universe directly, one relies on the results of numerical simulations," Andreas Maurer and Martin Raue, of the University of Hamburg in Germany, told SPACE.com in an email.

Astronomers hope that by studying this background glow, they eventually can determine whether groups of stars are powered by dark matter or by the more familiar method of fusion.

The researchers' findings appear in the February issue of the Astrophysical Journal.

Powered by the unseen

Stars form when gravity pulls material in space together.

As clouds of hydrogen and helium — the only two elements present in the early universe — collapsed, dark matter caught in the middle would be compressed.

Dark matter, just like regular matter, is thought to have a strange sibling called antimatter. "Every particle in the universe has an antiparticle," explained University of Chicago astrophysicist Douglas Spolyar, who was not involved in the new research, but who has studied how dark matter may have fueled early stars.

When a particle and its antiparticle meet, Spolyar explained, they annihilate one another, decaying into photons, electrons and positrons. As these lighter particles interact with the medium surrounding them, they heat it. If that medium were in the center of a newly formed star, dark matter annihilation could replace the process of fusion and fuel the stellar core.

Similarly, if an established star captured enough dark matter, the destruction of dark matter particles and antiparticles could replace fusion as a power source.

The process is powerful enough that only about 1 percent of the stellar mass would have to be dark matter for it to take over.

Dark stars are larger and cooler than their conventionally fueled counterparts. They also last longer than fusion-driven stars.

"Given a sufficient supply of dark matter, dark stars can also have lifetimes exceeding the age of the universe — they could still exist today," Maurer said.

And dark stars may still be forming.

As more-precise measurements of the extragalactic background light are taken, astronomers will be better able to constrain dark matter stars. Instruments such as those on the upcoming James Webb Space Telescope could help refine these numbers.