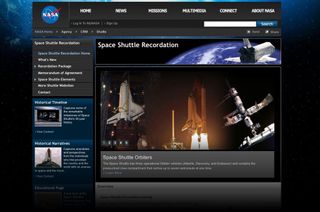 While the Smithsonian gets ready to receive the retired space shuttle Discovery for display this spring, NASA, together with archivists spread across four states, is preparing to preserve the historic orbiter and its sister ships digitally and on paper.

"Recordation is a term generally used in the context of Historic American Building Surveys or Historic American Engineering Records," NASA's federal preservation officer Jennifer Groman told collectSPACE in an e-mail. "We at NASA have adopted the term for a broader purpose to cover the documentation efforts we are conducting as part of a memorandum of agreement with several state historic preservation officers and the Advisory Council on Historic Preservation for our Section 106 compliance under the National Historic Preservation Act."

Section 106 requires federal agencies to take into account the effects of their undertakings on historic properties. In this case, it is NASA's decision to transfer the shuttles to museums for public display. [Photo Tour Inside Shuttle Discovery]

Under the memorandum of agreement, NASA is developing a historical narrative of the development and design of the Space Transportation System, more commonly known as the space shuttle.

"The recordation package will include measured drawings developed by the National Park Service and contractors based on laser technology, large format photographs, oral histories, videos and a bibliography," Groman said.

According to its website, the recordation effort is paying special emphasis to the changes to the orbiters that were ordered in the wake of the two shuttle accidents. Shuttle Challenger was lost 73 seconds into its launch on Jan. 28, 1986 and Columbia was lost 16 minutes before its planned landing on Feb. 1, 2003.

Discovery, which returned the fleet to flight after both of the tragedies, has been identified by NASA as the "shuttle of record," which means it has been and will be the orbiter most extensively documented and researched.

Over the past two years, NASA has partnered with state historic preservation offices in Alabama, California, Florida and Texas, as well as the National Park Service, to carry out its recordation effort.

"NASA has had team member representatives from every center that have been involved with the development and preparations of the orbiters," Groman said. "Additionally, different NASA personnel and contractors located across the country have contributed photos of the preparations and last flights of each orbiter, conducted oral histories, and developed the recordation package."

Now those multimedia materials are beginning to be made available online for public use.

"The Space Shuttle Recordation website was kicked off in December of 2011," Groman said. "We are still awaiting delivery of different recordation products that will be made available on our website as they are completed, such as the final versions of the narrative, photos and measured drawings."

A copy of the materials will also be held by the Library of Congress.

Among the recordation features already online are nearly 60 panoramic images, or 360-degree movies, of Discovery from both exterior vantage points and from inside its crew cabin and payload bay.

An historical narrative, which Groman expects to be "fairly thick in hard copy," will be posted online this summer.

As the virtual space shuttle Discovery debuts on NASA's recordation website, the real orbiter is in the final stages of being readied for display at the Smithsonian's National Air and Space Museum.

The museum stated last week that Discovery would arrive at Dulles International Airport in Washington, D.C. on April 17 and then be transferred to its annex, the Steven F. Udvar-Hazy Center, located adjacent to the airport two days later.

Flown from the Kennedy Space Center in Florida on top of a modified Boeing 747 airliner, Discovery will be the first of NASA's retired space shuttles to go on public display.

The dates for Discovery's delivery are weather contingent. Additional related activities, such as a possible flyover of Washington, D.C., are still being finalized.

Discovery will take the place of the test orbiter Enterprise, which will similarly be moved to New York City's Intrepid Sea, Air and Space Museum within a week of Discovery's arrival.

Discovery's sister ships, Endeavour and Atlantis, will be delivered to their display homes in California and Florida later this year and in early 2013.