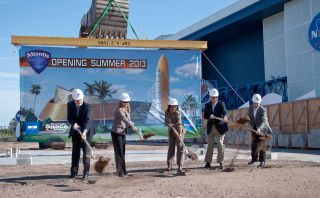 The final astronaut to lead a space shuttle mission returned to his launch and landing site in Florida on Wednesday (Jan. 18) to help break the ground for his spacecraft's future public display.

Chris Ferguson, who commanded the final flight of shuttle Atlantis last July, joined NASA and Florida state officials at the Kennedy Space Center Visitor Complex near Cape Canaveral for a ceremonial ground breaking for the 65,000-square-foot exhibit dedicated to the retired winged orbiter.

"It's very fortunate we can celebrate this milestone," Ferguson said. "Fortunate we had the foresight and resources to preserve Atlantis to serve as a reminder of the limitless potential of the citizens of the United States of America, and inspire those who will come after us."

Billed as the marquee element of the visitor complex's ten year master plan, the $100 million Atlantis exhibit will tell the story of NASA's 30-year space shuttle program, while providing a unique vantage point for guests to see the historic vehicle up-close.

Shovels in hand, Ferguson and the four others dug into the dirt while standing in front of a large banner hanging from a backhoe excavator. The backdrop showed a new rendering of the exhibit hall's exterior design and revealed the complex's plans to erect replicas of the shuttle's twin 149-foot (45 meter) tall solid rocket boosters and 154-foot (47-meter) tall external fuel tank just outside the display.

"This is an incredible day for our nation's space program," Moore said. "Today marks the start of a new era in which this magnificent ship, Atlantis, which has traveled to space and back an astounding 33 times, will remain docked in her home port, displayed in all her glory with a new mission to uphold — to inspire a new generation of space explorers who will take us to even greater heights."

According to Moore, the exterior of the six-story building will be comprised of two sweeping architectural elements, or "wings" representing the shuttle's launch and return. [Gallery: Baby Photos for Shuttle Atlantis]

The outer layer of the exhibition hall, which will be cloaked in iridescent hues of orange and gold, represents the fiery glow of re-entry. The taller, internal wing of the building will be covered in a shimmering tile pattern in varying tones of gray designed to evoke the tiled underside of the orbiter.

At the entrance, guests will be greeted by full size, upright replicas of the shuttle's external fuel tank and twin solid rocket boosters. On the opposite side of the booster and tank assembly, a silhouette of the orbiter will give guests an idea of the shuttle's exact size and placement when it was on the launch pad.

"The 184-foot-tall space shuttle stack will give visitors a true sense of the massive size and awesome power used to thrust the shuttle into low-Earth orbit," visitor complex officials described in a statement. "However, they will have to travel a little further and wait a few more moments to get up close to the real thing — the actual orbiter, Atlantis."

Moore said that further details concerning the space shuttle exhibit will be revealed in phases as the project continues toward its opening date of summer 2013. Atlantis will be shown with payload bay doors open and replica robotic arm extended. The orbiter will be set against a backdrop of just a sliver of an orbital sunrise as if Atlantis was just emerging into the lit side of its 90-minute orbit around the Earth.

The exhibit, which will be located in the visitor complex's "Shuttle Plaza," will be adjacent to the park's existing ride attraction, the Shuttle Launch Experience.

Atlantis, which on Friday (Jan. 20) will be rolled from its processing hangar to NASA's 52-story Vehicle Assembly Building to await further display preparations, is expected to arrive at the visitor complex early next year.

To accommodate the visitor complex's display plan and to make Atlantis safe for public viewing, NASA technicians have been working since the shuttle landed last summer to remove hazardous materials and to reduce the orbiter's overall weight. Atlantis will be outfitted with three replica main engines and recently had its robotic arm and airlock lifted out of its cargo hold. Both large fixtures will not be reinstalled.

NASA powered down Atlantis, including its "glass" cockpit controls, for the final time in December.

Before the exhibit opens in 2013, visitors to the complex may have the opportunity to see Atlantis while it is in the Vehicle Assembly Building. The center offers a "KSC Up Close" bus tour that includes going inside the voluminous building.

To prepare for Wednesday's ground breaking and to clear the way for Atlantis' arrival, the visitor complex previously had removed a full-scale, walkthrough replica of the space shuttle and a horizontal display of the space shuttle solid rocket boosters and external fuel tank.

The model orbiter, named Explorer, will move this March to Space Center Houston, where it will be displayed by the official visitor center for NASA's Johnson Space Center in Texas. Explorer's external tank and boosters will move to Los Angeles, where they are to be exhibited along with the real shuttle Endeavour at the California Science Center.

The third and oldest of NASA's retired space shuttles, Discovery, will be ferried this April atop a modified Boeing 747 to Virginia for its display at the Smithsonian National Air and Space Museum's Steven F Udvar-Hazy Center.

Discovery will be taking the place there of the prototype orbiter Enterprise, which will in turn will be flown to New York City for exhibit by the Intrepid Sea, Air and Space Museum.