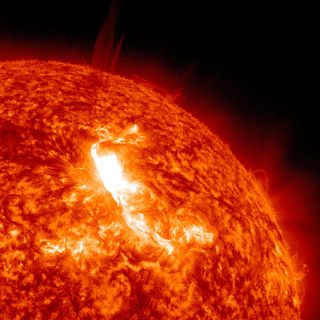 A recent eruption from the sun was so strong it was felt by NASA's Mars-bound Curiosity rover en route to the Red Planet.

The solar tempest occurred on Sunday (Jan. 22), contributing to the largest radiation storm since 2003. The solar particles released were so abundant they were enough to be registered by Curiosity's Radiation Assessment Detector (RAD), an instrument designed to measure the radiation levels on Mars.

The lucky timing also allowed the detector to measure how much radiation astronauts might be subjected to during a journey to Mars. Curiosity, the centerpiece of NASA's Mars Science Laboratory (MSL) mission, is due to arrive at our neighboring planet in August.

"We only have a few hours of data downloaded from the RAD so far, but we clearly see the event," said RAD principal investigator Don Hassler of the Southwest Research Institute in San Antonio, Texas, in a statement. "This [solar particle event] encounter is particularly exciting in light of the alignment between the Earth, MSL and Mars right now and for the next few months. It will be very interesting to compare the RAD data, collected from inside the capsule, with the data from other spacecraft."

Curiosity launched in November 2011 on a mission to determine whether Mars is, or used to be, habitable. The rover is equipped with 10 separate instruments, including the RAD, to study many facets of the Red Planet. [Video: Sun Storm Measured by Mars Rover]

"RAD was designed to characterize radiation levels on the surface of Mars, but an important secondary objective is measuring the radiation during the almost nine-month journey through interplanetary space to prepare for future human exploration," Hassler said. "Not only will this give us insight into the physics of these giant clouds, but like an astronaut, RAD is tucked inside the MSL 'spacecraft. Measurements from RAD will give us insight about the shielding provided by spacecraft for future manned missions in deep space."

The coffee can-size RAD instrument has been collecting data nearly continuously throughout its cruise to Mars. When the rover arrives at its destination, RAD will tune its sensors toward detecting charged particles, neutrons and gamma rays arriving from space.

The recent solar eruption is just a taste of things to come. Activity on the sun waxes and wanes in an 11-year cycle, and our star is nearing its next phase of solar maximum, when more frequent and intense storms are expected.