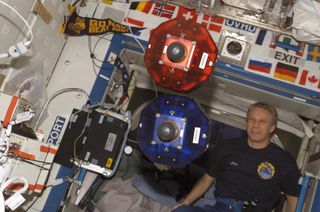 ESA astronaut Thomas Reiter with the Spheres robots on the ISS.
(Image: © NASA)

Two basketball-size robots gave off puffs of compressed gas as they flew around inside the International Space Station to simulate the mining of virtual asteroids. Their success or failure depended completely upon computer coding provided by student teams watching from 250 miles below on Earth.

"It is just amazing to me what these high school students have accomplished," said Charlie Bolden, NASA administrator. "To program a robotic spacecraft with the precision of a NASA flight controller is
quite a feat, but to have that ability, talent and discipline at such a young age is remarkable. Our future is in good hands."

Students had to program the robots to perform certain maneuvers that mimicked docking, formation flying or retrieving objects. Pettit and Kuipers acted as astronaut referees, and occasionally scrambled to "refuel" the robots by digging into the space station's extra tanks of carbon dioxide.

The contest took on heightened intensity when a glitch brought down the video connection during the championship round. But Pettit saved the day by stepping in to narrate the robotic maneuvers over the live audio feed.

"They're stabilizing at 50 centimeters (nearly 20 inches) and closing," Pettit announced to the MIT crowd. "Are they going to crash? They just missed each other! It looks like they've completed … and we have a score!"

Teams from high schools in Maryland, New Jersey and Florida claimed first place in the U.S. competition under the collective name of "Alliance Rocket." The European winning teams, called "Alliance CyberAvo," hailed from Turin, in Italy, and Berlin.

The contest was sponsored by NASA and the U.S. military's DARPA research arm — both agencies with a strong interest in boosting the onboard intelligence of satellites, spacecraft and robots.