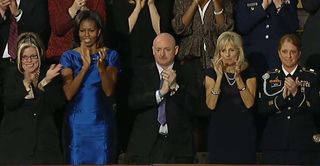 Former NASA astronaut Mark Kelly applauds President Barack Obama after the 2012 State of the Union address. Kelly sat with First Lady Michelle Obama in the First Lady's box during the president's speech while his wife, Arizona Congresswoman Gabrielle Giffords, attended on the floor of the House chamber on Jan. 24, 2012.
(Image: © White House Webcast)

Kelly, who commanded NASA's second-to-last space shuttle mission last year, sat with First Lady Michelle Obama during the president's speech. He watched from the First Lady's box as Giffords received a standing ovation, a stirring show of support from her colleagues, when she arrived.

Giffords suffered a gunshot wound to the head on Jan. 8, 2011 during an assassination attempt in Tucson, just months before Kelly's spaceflight. She announced her plan to retire from Congress earlier this week.

As President Obama approached the podium to deliver tonight's State of the Union address, he stopped to give Giffords a warm welcome. The two were all smiles as they embraced and rocked back and forth amid more applause. [Photos: Astronaut Mark Kelly & Gabrielle Giffords]

"Thankful to be watching tonight's #SOTU address next to @MichelleObama. Gabby's attendance will be a proud moment for all of us," Kelly write in a Twitter post. "Wonderful to see my wife Gabby w/her colleagues at the #SOTU—I continued to be amazed by her. #Strong."

Kelly officially retired from NASA and the U.S. Navy in June 2011. Vice President Joe Biden attended Kelly's retirement ceremony in Washington. Giffords announced on Jan. 22 that she will step down from office to focus on her health and rehabilitation.

"I have more work to do on my recovery, so to do what is best for Arizona I will step down this week," Giffords said in a video message posted on her Facebook website. "Arizona is my home, always will be. A lot has happened over the past year; we cannot change that. But I know, on the issues we fought for, we can change things for the better: jobs, border security, veterans. We can do so much more by working together."

During his State of the Union address, Obama did not mention NASA or his vision for deep space exploration of asteroids and Mars, but he did emphasize the need for innovation to remain competitive in the fields of science and technology.

Obama's speech came one day after Republican presidential debates took place in Florida, where candidates Mitt Romney and Newt Gingrich made statements that called for a leaner NASA and more support for private space industry initiatives.