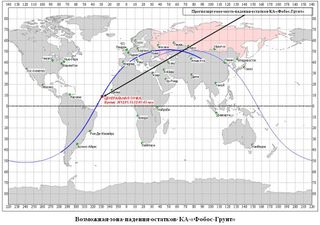 A botched Russian Mars probe is just hours away from a fiery doom when it plunges into Earth's atmosphere in a fatal crash. It won't fall over the United States, but may crash into the Atlantic Ocean, Russian space officials said today (Jan. 15).

The spacecraft, Russia's Phobos-Grunt Mars moon probe, has been stranded in Earth orbit since its November launch due to an engine failure that prevented it from beginning its journey to the Red Planet. The probe may fall any time between 12:50 p.m. EST and 1:34 p.m. EST (1750 to 1834 GMT), with a potential crash zone in the Atlantic, west of northern Africa, but exactly where the spacecraft will crash is still uncertain, Russian Federal Space Agency (Roscosmos) officials said in a statement.

Where will Phobos-Grunt crash?

But there are still large uncertainties over where exactly the spacecraft will fall.

"About two hours out, the U.S. military will publish their last re-entry prediction, and that will likely be the most accurate public prediction, as they have very accurate data on the object's orbit that will not be available publicly," Brian Weeden, a technical adviser with the Secure World Foundation and a former orbital analyst with the Air Force, told SPACE.com in an email. "Up until then, I would take any prediction with a large grain of salt." [Infographic: The Fall of Russia's Doomed Phobos-Grunt]

Russian space officials have said that between 20 and 30 pieces of Phobos-Grunt could survive re-entry and hit the Earth. In all, about 440 pounds (200 kilograms) of the spacecraft is expected to survive.

The Phobos-Grunt spacecraft is huge, weighing about 14.5 tons, but most of that mass is contained in its fuel tanks, which are filled with tons of toxic rocket propellant that was supposed to be used on the trip to Mars. Russian and U.S. space officials have said the fuel tanks should  burst during re-entry, allowing the fuel to burn up before reaching the ground.

The probe is also carrying Yinghuo-1, China's first Mars orbiter, which was hitching a ride to the Red Planet with Phobos-Grunt.

Russia launched the $165 million Phobos-Grunt on Nov. 9 Moscow time (Nov. 8 EST) on a mission to collect samples from Mars' largest moon Phobos and return them to Earth. The probe has a cone-shaped sample return capsule that was designed to survive a plunge through Earth's atmosphere in order to deliver the Mars moon samples.

Since most of the Earth's surface is covered by water, there is a large chance that Phobos-Grunt will crash into an ocean. Previous Roscosmos predictions have placed the point of impact in the Indian Ocean, southern Atlantic and southern Pacific oceans, but the space agency's latest estimate from today does not pinpoint an estimated crash zone.

Russia, the U.S. Space Surveillance Network and the European Space Agency are all monitoring Phobos-Grunt spacecraft's final hours in space. [Photos of the Phobos-Grunt Mars Mission]

"ESA experts now expect Phobos-Grunt to re-enter in the late afternoon/early evening (CET) of 15 January 2012, with an uncertainty of +/- 4 hours," ESA space debris experts wrote in a statement.

And the space agencies aren't alone in their falling Mars probe vigil.

"There are also a number of other entities that appear to be monitoring Phobos-Grunt (the amateur observers, Aerospace, Celestrak, etc) but they are almost all relying on the [tracking] data that is made public by the US military, which is a lot less accurate that the private data the US military, the Russians, or ESA will be using to make their calculations," Weeden said.

Phobos-Grunt is the latest in a series of satellite falls in recent months. In September, a defunct NASA satellite called the Upper Atmosphere Research Satellite (UARS), fell to Earth after two decades in space. That fall was followed by the old German X-ray observatory ROSAT, which crashed to Earth in October. But unlike Phobos-Grunt, which failed just after its launch, The UARS and ROSAT satellites were already shut down after completing long, successful missions.

Russia has also had to deal with falling satellites in the past. In 1978, the Soviet spacecraft Cosmos 954, a nuclear-powered Radar Ocean Reconnaissance Satellite, crashed in Canada's Northwest Territories after four months in space. The crash scattered radioactive material across parts of Canada's Great Slave Lake, northern Saskatchewan and Alberta, and prompted a joint U.S.-Canadian clean-up operation.

Phobos-Grunt does have one instrument,  a spectrometer, that uses the radioactive Cobalt-57 as a component, but the amount of material is extremely small  (less than 10 micrograms) and should not post a concern,  according to Lev Zelenyi, director of the Space Research Institute in Moscow and chairman of the Russian Academy of Sciences’ Solar System Exploration Board.

The largest spacecraft ever to fall uncontrolled from space was NASA's 85-ton Skylab space station, which plunged to Earth over the Indian Ocean and Western Australia, with some large pieces reaching the surface in Australia.

The loss of Phobos-Grunt was a major blow to Russia's space program, which saw five failed space missions in 2011, including the malfunctioning Mars probe.  In December, Russian president Dmitry Medvedev said those responsible for the failure could face disciplinary action. The failure also prompted Zelenyi to write an open apology letter to the public and other scientists.