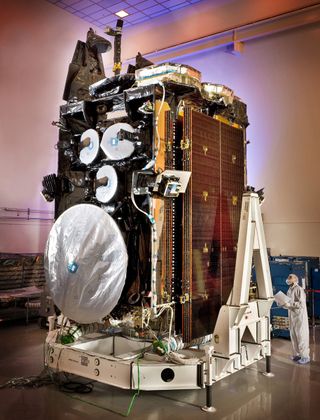 As the new year is ushered in, flight controllers are continuing with the detailed checkout of the U.S. military's newest ultra-secure communications satellite after a miraculous recovery saved the craft's life.

It's a standard practice for launchers to place communications satellites into highly elliptical transfer orbits, then allow the spacecraft themselves to finish the job by maneuvering into the circular geosynchronous orbits 22,300 miles above the planet where they match Earth's rotation and appear parked over one spot of the globe.

The Atlas 5 rocket successfully put the craft into a supersynchronous transfer orbit with a high point of 31,060 miles, low point of 170 miles and inclination of 22.1 degrees. [Most Amazing Rocket Launch Photos of 2011]

The satellite's main engine was supposed to produce 100 pounds of thrust while burning hydrazine fuel and nitrogen tetroxide during three firings to propel AHEF 1 into an intermediate orbit after launch.

The satellite's novel electric propulsion system using Hall Current Thrusters then would finish shaping the orbit into a circular, geosynchronous altitude about 22,300 miles high and inclined 4.8 degrees by late November 2010.

But attempts to burn the Liquid Apogee Engine (LAE) in the days after launch produced no acceleration and were immediately aborted by the spacecraft.

Dave Madden, director of the Military Satellite Communications Systems Directorate at the Air Force's Space and Missile Systems Center, recalls those tense days as the team huddled to oversee maneuvers.

"The first time we fired the LAE and it failed I really wasn't worried that much at all because we see that kind of thing a lot of times. In general, I tell my guys when something fails, the satellite is smarter than we are and it's probably telling us something we don't realize and we're trying to do something it shouldn't do. So the first time I just assumed it was something we did wrong -- and the data generally supported that.

"So when we fired it the second time and it shut itself off even quicker than the first time, the first thing that went through my head was 'we lost the vehicle.' We were going to be stuck in this orbit.

"Then two minutes later the engineer in me kicked in and I took a deep breath and said OK, what do we need to do to make the vehicle safe? Let's organize our thoughts. How are we going to going to get the vehicle to orbit? Let's put the team together, circle the wagons, build a fishbone and try to figure out what we need to get done, and then, last phase, look at what caused this anomaly because we may have different options later on if we can understand the anomaly better."

According a Government Accountability Office report issued last summer, investigators probing the problem determined that debris mistakenly left inside the craft was the culprit. The clogged plumbing would mean the engine was forever deemed unusable.

The report cited "blockage in a propellant line that was most likely caused by a small piece of cloth inadvertently left in the line during the manufacturing process."

Valued at over $1 billion and the first in a new series of nuclear-survivable spacecraft that would ensure American leadership with communications in the most hellish scenarios of war imaginable, the AEHF 1 would be a total loss if it remained stranded in the transfer orbit. [10 Technologies Poised to Transform our World]

Faced with the prospect of failure, the team got creative to draw up a Plan B to salvage the spacecraft and somehow get it maneuvered into the proper orbit.

The best option was using the craft's much smaller hydrazine thrusters to lift the orbit a bit, then rely on the exotic electric thrusters in a way never planned -- firing them for days, weeks and months as their whisper-like push eventually accumulated to propel AEHF 1 where it was supposed to go.

It was an unprecedented rescue campaign, like no other in recent memory for Air Force spacecraft. But after 14 months and nearly 500 maneuvers, AEHF 1 finally reached a circular geosynchronous orbit on Oct. 24, 2011.

"The tremendous demonstration of engineering excellence, superior teamwork and remarkable creativity truly is what saved this vehicle," said Madden.

The craft unfurled its antenna wings in the final days of October before commencing four months of in-orbit testing that is expected to last through March.

"After successful on-orbit test and checkout, we'll transfer the satellite command authority from the Space and Missile Systems Center to the 14th Air Force," Madden said.

Despite the extra maneuvers and long wait to get the satellite into a usable orbit, officials still expect to get the full 14 years of mission life out of the bird once it enters operations later in 2012. [Gallery: Declassified US Spy Satellite Photos & Designs]

"We believe the strategy we used to get it into orbit, the fuel we used and how we did it still allows the vehicle to get a full, at least 14-year mission life, if not significantly longer," said Madden.

Terminals in use with the Army, Navy and Air Force are exercising improved data rate communication connections that AEHF will bring to the warfighter. Other testing is verifying the backwards compatibility of the spacecraft with legacy gear from the Milstar satellite program that this next-generation AEHF satellite series will replace. Also on tap is integrating the AEHF 1 into Milstar's global network that rings the planet.

The checkout includes 76 specific tests and 374 objectives to confirm AEHF 1 is fully ready for handover to Air Force mission controllers that will place the craft into operations.

"What the team did was really an exciting thing...and saving this mission is probably the most significant thing I've seen," said Madden, who has spent a 30-year career working in the military space program.

"As the follow-on to Milstar that provides the assured, survivable, protected communications, we had a critical mission that has to be met. Providing this space-based capability to the president, top military commanders and our international partners is probably one of the most important missions the United States supports for nuclear deterrent communications."

And with AEHF 1 now progressing along, officials have given approval to ship the AEHF 2 satellite from Lockheed Martin's manufacturing plant in Sunnyvale, Calif., to Cape Canaveral in early-to-mid February to begin final preps for blastoff atop an Atlas 5 rocket on April 27.

The Air Force also recently inked a $227 million deal with industry to begin buying parts to build the structures and communications payloads for the AEHF 5 and 6 satellites. Buying the two craft together saved $42 million versus purchasing them separately, Madden said. Full production contracts for the spacecraft are still to come.