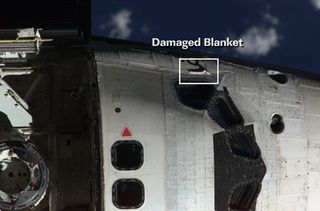 This image, taken by astronauts aboard the International Space Station (ISS), shows the damaged blanket near the orbiter's crew cabin window.
(Image: © NASA.)

HOUSTON - NASAengineers are working through the night to replicate the type of thermalblanket damage afflicting Discovery, sending three different samples throughwind tunnel tests to determine if the fabric could rip off during reentry andstrike the vehicle, mission managers said late Wednesday.

The blanket,a small quilt-like material glued to the orbiter just under a left-side window,came partially loose during launch and poses no danger to the shuttle from aheating standpoint, shuttle officials have said. But engineers are unsure aboutits status as a potential debris source during reentry, when the shuttle fliesthrough the atmosphere at faster-than-sound speeds.

"We're notgoing to leave any stone unturned at this stage," NASA's deputy shuttle programmanager Wayne Hale said during evening press briefing here at Johnson Space Center."We want to make sure that this doesn't do any serious damage."

Earliertoday, STS-114 lead spacewalk officer Cindy Begley said discussionsfor a potential fourth spacewalk to address the blanket - should it be needed -are ongoing, with possible fixes ranging from removing the material entirelyusing scissors or ventilating it with slashes so it is less likely to inflateand shear off.

The damagedblanket runs about 20 inches (50 centimeters) in length, though only abouteight inches (20 centimeters) of the 3.8-inch (9.6-centimeter) wide material ispuffed out, shuttle officials said.

"Worst caseis we could do some structural damage," Hale said.

Engineerspredict that should the small blanket shed material during reentry, the largestpiece should weigh only 0.05-pounds (0.02 kilograms), though the type of damagethat might inflict - if any - is unclear, shuttle officials said.

In 1984, aheater glitch in a water dump nozzle during NASA's STS-41B mission aboardChallenger led to the build-up of a four-pound (1.8-kilogram) ice ball alongthe side of the orbiter that broke off during reentry as the shuttle was flyingat about Mach 4.5, Hale said. The ice ball damaged the shuttle's tiles and skinof an Orbital Maneuvering System (OMS) pod, but the orbiter landed safely, hesaid.

Hale saidthat orbiter thermal blankets did suffer fraying during early shuttle flights,but that the problem was overcome with the development of a new coatingmaterial. The problematic blanket on Discovery has been repaired, but that fixis holding and not the source of its damage, he added.

The thermalblanket is the final outstanding piece of Discovery's heat shield beforemission managers can clear the orbiter for landing.

Meanwhile,Discovery's crew is completing their resupply mission at the InternationalSpace Station (ISS).

"We arebringing the space station up to about maximum capacity on all of its needs,"Hale said.

So far thenine astronauts have unloaded all of the tons of cargo the brought to the ISSinside the Italian-built Raffaello cargo module. The work to load more tons oftrash, obsolete equipment and other unneeded items is about 75 percent complete,NASA officials said.

Discovery'sSTS-114 astronauts are set to return to Earth on Aug. 8.