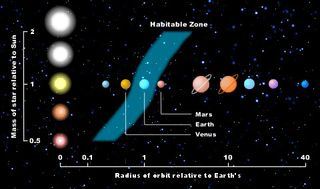 The distant region beyond Saturn is too cold for liquid water, a necessity for life as we know it. But new research indicates that rocky planets far from their parent star could generate enough heat to keep water flowing - if their atmospheres were made up primarily of hydrogen.

Planets near their suns reap the benefits of light and heat, while those farther away must endure colder temperatures. But the new research indicates that planets with hydrogen-rich atmospheres could contain liquid at their surface even out to fifteen times the distance between the Earth and the Sun.

With a hydrogen atmosphere, the greenhouse effect these planets could experience would be sufficient to allow for liquid water on their surfaces, despite their distant orbits.

The area around a star in which water can be liquid rather than ice is known as the habitable zone. Sometimes called the "Goldilocks zone," it's just right - not too hot (so the water doesn't evaporate) and not too cold (so it won’t freeze).

Typically, the distance calculated takes into account a rocky body having an atmosphere made up of water and carbon dioxide, the same greenhouse gases found on Earth.

"This is the kind of planet we know is habitable," explains Raymond Pierrehumbert of the University of Chicago, lead author on a paper published recently in the Astrophysical Journal Letters.

Although life could feasibly exist in many locations throughout the universe, we only know of one place it definitely formed - Earth. Thus astronomers find themselves seeking other, similar planets in the hopes of finding life elsewhere. [5 Bold Claims of Alien Life]

The size of a solar system’s habitable zone varies, however, depending on the properties of the star. For hotter, brighter stars, the region stretches farther out into space, while its inner edge cannot be too close to the star.

The habitable zone for a G-type star such as the Sun, for instance, lies between 0.95 and 1.4 AUs (one AU, or astronomical unit, is the distance from the Earth to the Sun). The Earth, quite obviously, falls within that region. For a smaller, dimmer M-type star, the habitable zone is closer, between 0.08 and 0.12 AUs.

But according to Pierrehumbert's research, , a rocky planet with a hydrogen atmosphere could have a habitable zone extending as far as 1.5 AUs for M-stars and 15 AUs for G-stars.

This means that for stars similar to the Sun, rocky planets beyond the reach of Saturn could contain oceans of water.

Travis Barman of Lowell Observatory notes that there might be many similar scenarios of planets that don't mimic Earth but are still habitable. Barman, who was not part of the new research, has done extensive research of his own modeling the atmospheres of extrasolar planets.

Speaking of the new research, Barman said, "it broadens our notion of the habitable zone, at least in the sense of basic life…Such work is timely, as the search for potentially habitable terrestrial planets is just ramping up."

Pierrehumbert’s team had to locate a "Goldilocks zone" for hydrogen-rich planets orbiting different types of stars. If such a planet were too close to its parent star, the stellar energy could destroy the hydrogen atmosphere. But more distance reduced the chance of liquid water on the planet’s surface.

"Happily, there appears to be a zone close enough to allow liquid water, but not so close as to cause the atmosphere to be lost," said Pierrehumbert.

Then, too, the formation of such an atmosphere doesn't mean it will be around long enough for life to develop.

Pierrehumbert points out that the tectonic activity such as volcanism or earthquakes could release carbon monoxide, converting the hydrogen into methane.

At the same time, microbial life could consume hydrogen, destroying the atmosphere that supports them.

"Making the whole system work, especially on an M-star, is quite tricky," he said. "You may have a lot of failed habitable planets out there because they didn't find a sustaining process."