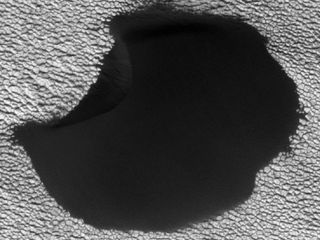 A dune in the northern polar region of Mars shows significant changes between two images taken on June 25, 2008 and May 21, 2010 by NASA's Mars Reconnaissance Orbiter.
(Image: © NASA/JPL-Caltech/Univ. of Ariz./JHUAPL )

A powerful NASA spacecraft has spotted shifting sand dunes and ripples all over Mars, with strong Martian winds keeping the sandy Martian surface much more active than scientists ever imagined.

The new images from the Mars Reconnaissance Orbiter show wind-blown sand dunes moving across the Martian surface, sometimes up to several yards at a time, scientists said.

"Mars either has more gusts of wind than we knew about before, or the winds are capable of transporting more sand," explained planetary scientist Nathan Bridges of the Johns Hopkins University's Applied Physics Laboratory in Laurel, Md., who led the new study on the shifty sand dunes on Mars. "We used to think of the sand on Mars as relatively immobile, so these new observations are changing our whole perspective."

The findings by Bridges and his team are detailed in the online edition of the journal Geology.

Scientists have long known that the red dust on Mars can swirl and blow about in many ways, ranging from vast dust storms to small whirlwinds (called dust devils).  But less than 10 years ago, astronomers still thought the Martian dunes and sand ripples were either immobile or moved too minutely to ever see, according to a NASA statement.

The dark sand grains of Mars are harder to move than those of Earth's deserts and beaches because they are larger, and because the Martian atmosphere is thinner than Earth's. Wind tunnel tests have shown that 80 mph (130 kph) gusts are required on Mars to move a single a patch of sand. On Earth, the wind needs to blow only about 10 mph (16 kph) to achieve the same feat. [Video: Sand Dunes Crawl Across Mars' Surface]

But such high wind speeds on Mars are relatively rare, according to observations from NASA's Viking landers collected in the 1970s and 1980s.

The first clues of the Red Planet's moving sand dunes came from NASA's Mars Global Surveyor, which studied the planet from 1997 to 2006, but the probe could not snap photos clear enough to confirm the planet's surface changes, scientists said.

More evidence was found by Spirit and Opportunity, NASA's Mars Exploration Rovers, which detected shifting sand when they touched down on the surface of the Red Planet in 2004. Mission controllers unexpectedly found grains of sand were dotting the rovers' solar panels, and also noticed that Spirit and Opportunity's track marks were filling in with sand.

"Sand moves by hopping from place to place," said Matthew Golombek, co-author of the study and a member of the Mars Exploration Rover and Mars Reconnaissance Orbiter teams at NASA's Jet Propulsion Laboratory in Pasadena, Calif. "Before the rovers landed on Mars, we had no clear evidence of sand moving."

But the researchers also saw several areas where the sand dunes did not move, which indicates that not all of the sand on Mars blows in the wind.

"The sand dunes where we didn't see movement today could have larger grains, or perhaps their surface layers are cemented together," said Bridges. "These studies show the benefit of long-term monitoring at high resolution."

It could be that the areas that seem stationary just take longer to move, the researchers said, which could be triggered by climate cycles on Mars that last tens of thousands of years.

Since the tilt of Mars' axis relative to its orbital plane can vary dramatically, and since the planet's orbit is shaped like an oval, these factors can cause extreme changes in the Martian climate, the scientists said. These variations would be much greater than those experienced on Earth.

According to the researchers, Mars may once have been warm enough for the carbon dioxide that is now frozen in the polar ice caps to freely form a thicker atmosphere, and the resulting stronger winds could have been responsible for transporting sand.