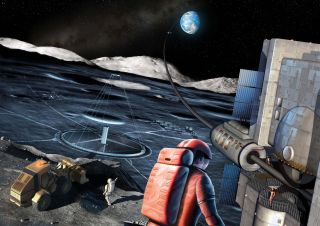 Dr. Mark Garlick—an illustrator and astrophysicist—created this moonscape depicting a lunar elevator docking at a terminal on the Moon’s South Pole, a liquid mirror telescope, and a bulldozer mining for helium-3, some of the exciting technologies featured in the American Museum of Natural History’s new exhibition Beyond Earth: The Future of Space Exploration, which opens November 19.
(Image: © AMNH\Mark Garlick)

NEW YORK — The American Museum of Natural History here raised the curtain on its brand new space show this week, with help from two guys with first-hand experience.

NASA astronauts Mike Massimino and John Grunsfeld, who both flew on the last space shuttle mission to service the Hubble Space Telescope, were on hand at the museum to introduce a new temporary exhibition called "Beyond Planet Earth: The Future of Space Exploration."

"I used to come here as a little guy growing up here in New York," Massimino told SPACE.com. "I used to come here to dream about being an astronaut. I look at this as a great way for people to come and get inspired about what they might want to do as they get older, even for grownups, 'cause we still need inspiration too."

The new exhibition features artifacts, dioramas, videos, models, interactive games and even a mobile app to guide visitors through the experience. There's a scale model of a Vostok capsule, the first vehicle to carry a human to space, as well as a soviet space helmet, patches from the Chinese space program, and a lunar rover tire. [Gallery: NYC Museum's New Space Show]

Massimino and Grunsfeld said they got a particular kick out of a diorama featuring Grunsfeld performing one of the complex spacewalks to repair the Hubble telescope.

The museum's lead curator for the show is astrophysicist Michael Shara, who said the exhibition is coming at a critical time for NASA.

"We're at a kind of crossroads," Shara said. "We all know that the shuttle program has ended, and I think that that is a little bit like us graduating from kindergarten. We want to take those next steps out of our backyard into the neighborhood and then into the big city to visit all the other places in the solar system."

Though the exhibition has great objects to illustrate accomplishments made so far in space exploration, its focus is really on the future.

There's a 1/3 scale model of a space station module being developed by private space company Bigelow Aerospace, as well as a panorama of a manned mission to Mars that features astronauts wearing futuristic stretchy spacesuits (you can even pose as if you're wearing one yourself). One neat exhibit shows a lunar space elevator that could take humans from Earth to the moon.

"With the space shuttle program ending, you hear, 'It's all over with, stop'' Massimino said. "That's not true. There's a lot to look forward to and I think this depicts that very well."

During their visit to the museum, the spaceflyers met with New York City students and answered some of their questions about life as an astronaut.

One student asked how difficult it is to be in space, on a scale from 1 to 10.

"I think actually that's close to a one or a zero," Grunsfeld said. "It's hard work, but it's so magical and so much fun, that I'd like to be there all the time."