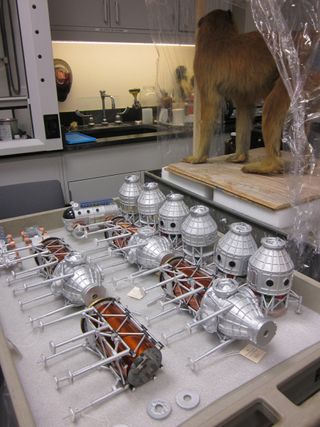 A 1/30 scale model of a Bigelow Aerospace moon colony is prepared in the conservation department of the American Museum of Natural History in New York.
(Image: © Clara Moskowitz/SPACE.com)

NEW YORK – A Space Age treasure trove of artifacts is being assembled here at the American Museum of Natural History.

Objects ranging from space garbage to spacesuits, a Mars meteorite, a space shuttle bolt and more are being gathered for the museum's new temporary exhibition, "Beyond Planet Earth: The Future of Space Exploration," which opens to the public Saturday (Nov. 19).

Pulling together a diverse inventory of artifacts and models to illustrate space exploration's past, present and future has been a complex process spanning more than 18 months.

Planning for the show started with the curator and AMNH's exhibition department, with input from many others, such as the museum's education department. These teams researched the best possible ways to tell their story, and reached out to other museums, scientists, companies and collectors to ask to borrow their treasures. [Top Milestones in Human Spaceflight]

"The objects from the space program are some of the most exciting objects we've had," said Martin Schwabacher, one of the exhibition writers who worked on the show. "We have real space food and real space garbage and a prototype spacesuit from MIT. At the last minute we got a Mars meteorite."

Bringing space history down to Earth

But the process of transporting and taking care of such unique and valuable items is complex. The museum's registrars office helps organize arrangements with lending institutions, and the objects make their way to New York.

That's when AMNH's conservators come in. These experts painstakingly inspect every object that arrives at the museum to document its condition and determine how best to preserve and protect it while it's in AMNH's care.

"I have an understanding of the material science, how things are potentially going to degrade, how they're going to be affected by various environments, and that's what I bring to the table," said Elizabeth Nunan, the museum's conservator overseeing the objects in the space show. "There's a high dork factor."

A conservator needs to know, for example, that "rubber degrades in certain conditions and certain environments," Nunan told SPACE.com."So if you have a pair of gloves that are made of rubber, you can kind of know, by breaking down the object into its materials."

This knowledge came in handy when analyzing a set of prototype space gloves lent by independent spacesuit glove designer Peter Homer, two-time winner of NASA's Astronaut Glove Challenge, a contest for inventors to improve on the current gloves used by NASA.

Other objects are less worrisome.

For some objects, conservators are like detectives, hunting down clues about an item's nature, composition, and needs.

For example, the museum borrowed a frangible nut from NASA, a bolt that was used to hold down the space shuttle on the launch pad until liftoff, when it would explode to release the shuttle into the sky.

Nunan said the first time she picked up the bolt, it felt surprisingly heavy.

"These are the kinds of 'tells' that objects give me," she said."When you pick up an object like this and it's heavier than you expect, that generally means there's some lead content, because lead is a heavy metal, and here you see rust, so that tells me that there's some iron content. So this is part of my assessment process; it's really telling me what it needs to stay in good condition."

Items like the bolt, as well as a packet of compressed food, wrappings and other garbage from a space mission, and a helmet from the Soviet Union's lunar program, help show the achievements mankind has already made in space.

"The historical objects really do resonate with you after you see them for real," said Eliza McCarthy, the lead Exhibition writer for the show.

Other objects, such as a 1/30 scale model of a moon colony being developed by Bigelow Aerospace, a commercial space firm in Las Vegas, and a model of Spaceport America, a facility being constructed in New Mexico that's billed as the first purpose-built commercial spaceport, are helping to show the possibilities for future space exploration.

Overall, the objects in an exhibition are just one part of the whole experience. The museum weaves together text, images, videos, interactive technologies, dioramas and environmental models to immerse visitors in the space mood.

"Our show is really a chance to convey what actually is happening, all the unmanned missions that I feel like don't get their proper due," McCarthy said. "It was really fun to learn about, and there is so much more going on than I think people are aware of if you only read the popular press. People are devoting their lives to trying to send spacecraft to space, and it's really amazing. That's what we're trying to convey."