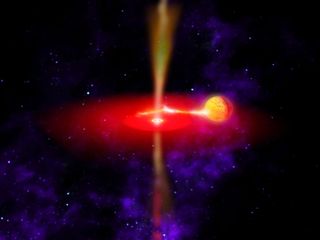 This artist's concept shows what the black hole GX 339-4 might look like as it sucks excess matter from a star orbiting only a few million miles away.
(Image: © NASA)

A black hole's greedy gobbling has apparently given it a case of cosmic indigestion, a new study reports.

A black hole called GX 339-4 is consuming its companion star, causing occasional flare-ups in its gassy jets, researchers said. Astronomers have captured detailed new images of the hard-to-view base of these jets as they grow three times in brightness over the course of a few hours before dimming again.

A black hole about as massive as our sun, GX 339-4 has a stellar companion only a few million miles away. As this bloated star sheds excess material, the gluttonous black hole sucks it up into an accretion disk, where it is heated to millions of degrees. Magnetic fields push some of the material away in rapidly moving jets.

Using NASA's Wide-field Infrared Survey Explorer (WISE), astronomers captured an infrared view of the base of these jets, an area that has long been difficult to observe. For most black holes, light from the jets is intermixed with light from the feeding star or the dusty clouds surrounding it, researchers said. [Photos: Black Holes of the Universe]

"GX 339-4 was caught with a particularly bright jet, with none of the other contaminating components," Posahk Gandhi, of the Japan Aerospace Exploration Agency, told SPACE.com via email. "We were able to cleanly focus on the jet in isolation."

The violent flare-ups are most likely caused by a small increase in matter coming from either the companion star or the surrounding dust, researchers said. But because the jets are so difficult to view, astronomers have not been able to establish a firm connection. The clear view of GX 339-4 may help to change that.

But some luck was also involved.

"WISE looked at the full sky, allowing serendipitous discoveries to be made," Gandhi said. "Since black holes are highly variable, you have to catch them at the right time, and we got lucky with WISE."

The international team of astronomers not only managed to image the activity in the infrared, but also in other spectrums.

"WISE happened to catch this source in a state of heightened jet activity in March 2010, when other radio, X-ray, optical and ultraviolet telescopes were observing the same source intensively," Gandhi explained.

"Thus we were able to gather all data…together in one place to give an exquisitely detailed look at the overall light emitted by this source."

These violent outflows are characteristic of black holes of all sizes. Though GX 339-4 is small as black holes go, the information gleaned from its jets can be scaled to its super-massive cousins, which dominate the center of galaxies such as the Milky Way, researchers said.

Their research was published last month in the Astrophysical Journal Letters.