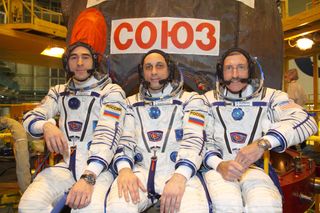 A trio of spaceflyers is slated to launch to the International Space Station this weekend, in what will be the first manned flight of the Russian-built Soyuz rocket since a failure in August temporarily grounded the fleet.

NASA astronaut Dan Burbank and Russian cosmonauts Anton Shkaplerov and Anatoly Ivanishin are scheduled to lift off from the Baikonour Cosmodrome in Kazakhstan on Sunday (Nov. 13) at 11:14 p.m. EST (0415 GMT Nov. 14).

This will be the first manned mission to the International Space Station since Aug. 24, when a Soyuz rocket carrying a robotic cargo ship suffered a malfunction minutes after launch. Both the rocket and the Progress 44 cargo freighter were lost in what was a rare mishap for the typically dependable fleet of boosters.

Separate investigations by Russia's Federal Space Agency, and an independent NASA panel, traced the problem to a gas generator malfunction in the rocket's third stage. The Soyuz rocket, along with the Progress 44 spacecraft and its 2.9 tons of supplies onboard crashed in Siberia shortly after launch, Roscosmos officials said.

On Oct. 30, in what was the first supply run to the orbiting complex since the August crash, an unmanned Progress 45 cargo ship successfully launched to the station carrying nearly three tons of supplies for the orbiting outpost. [50 Great Russian Rocket Launch Photos]

Burbank, Shkaplerov and Ivanishin are expected to arrive at the space station on Wednesday (Nov. 16) at 12:33 a.m. EST (0530 GMT), and dock their Soyuz TMA-22 spacecraft to the Russian Poisk module. The three spaceflyers will join the rest of the station's Expedition 29 crew: commander Mike Fossum of NASA, Japanese astronaut Satoshi Furukawa and Russian cosmonaut Sergei Volkov.

Just five days later, Expedition 29 will end when Fossum, Furukawa and Volkov return home at the completion of their nearly six-month mission at the massive orbiting complex. The trio is scheduled to undock from the Russian Rassvet module on Nov. 21 and will land on the steppes of Kazakhstan in Central Asia that evening.

The station's Expedition 30 will officially begin when the Soyuz capsule carrying Fossum, Furukawa and Volkov undocks from the space station. Burbank will then take over as commander of the outpost for the duration of his stay.

"I think the primary goals for our Expedition 29/30, in contrast to maybe some of the preceding ones, are the space station assembly is now complete, the bulk of the assembly is complete, so we’re essentially transitioning from a period of assembly being the primary objective and, and the primary operational constraint, to utilization now," Burbank said in a preflight interview. "So the idea is to, is to let the space station do what it was intended and what it was built to do and that is to do cutting edge research."

The station crewmembers will be heavily involved in scientific research, and are expected to collect data for a wide range of studies, including biology, physics and physiology.

"The majority of the experiments that are carried out in the medical/biological field are geared to study the behavior of a human body in space, in microgravity, in closed quarters, in some situation when your body is exposed to radiation, and we are basically a part of this experiment, and the scientists are observing not only the changes in our bodies but also they try to predict how you personally will be able to overcome various difficulties linked to spaceflight, and to develop new equipment, new suits, new medicine, new food that will allow us to move through space easier," Shkaplerov said in a preflight interview.

The Expedition 30 crew could also be present for the test flights of robotic commercial vehicles to the space station, including SpaceX's Dragon capsule and Orbital Sciences' Cygnus freighter, which are tentatively scheduled to occur in the new year.

Following the retirement of NASA's space shuttle program, commercial vehicles are expected to take on the role of ferrying supplies to and from the space station. Orbital Sciences already has a $1.9 billion contract to make eight flights using the company's Cygnus capsule and Taurus 2 rocket, both of which are under development.

SpaceX currently holds a $1.6 billion NASA contract to make 12 supply flights to the station. In December 2010, the company made its first orbital test flight with the Dragon capsule, which launched atop the company's Falcon 9 rocket.