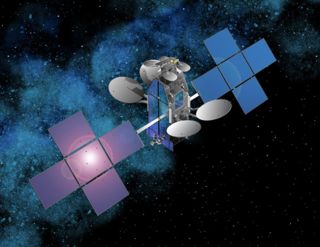 PARIS — The Isle of Man, which has made the space industry a keystone of its economic growth strategy, has reached a milestone with the launch of the first-ever satellite using one of its own orbital slots, the government’s commercial space contractor announced Oct. 26.

ManSat LLC, which assists the Isle of Man government in filing for orbital positions and broadcast frequency rights with the International Telecommunication Union (ITU), said the ViaSat-1 Ka-band broadband satellitewill be operated from a Man-registered slot at 115 degrees west in geostationary orbit.

ViaSat-1 is owned and operated by ViaSat Inc. of Carlsbad, Calif. It is the first satellite ViaSat has had built, and will be used to expand the ViaSat-owned WildBlue consumer broadband service in the United States, and a similar service in Canada to be provided by ViaSat-1 capacity purchased by Telesat of Ottawa.

A dozen or more space-related companies, including several large satellite operators, have set up shop in the Isle of Man, lured by the government’s favorable tax status for companies in the space sector.

ManSat, established in 1998, is under contract to the Isle of Man government to facilitate access to orbital slots and broadcast frequencies to companies with operations there.