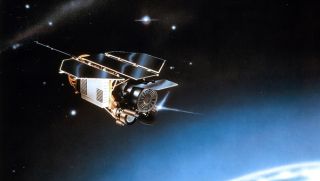 A huge German satellite destined to tumble from space could plunge to Earth today (Oct. 22), but it is still too soon for agency officials to know precisely where the doomed spacecraft could fall.

The 2.7-ton Roentgen Satellite, or ROSAT, is expected to break up as it re-enters Earth's atmosphere, but up to 30 large pieces of the X-ray observatory, including its heat resistant mirrors and other ceramic parts, could survive the fiery journey and reach the surface of the planet, according to German aerospace officials. The total mass of these fragments is estimated to reach up to 1.9 tons (1.7 metric tons).

The ROSAT satellite launched in June 1990 on a joint mission for Germany, the United States and the United Kingdom. The observatory, which weighs about 5,348 pounds (2,426 kilograms), is an X-ray telescope that studied radiation from stars, nebulas, black holes and supernovas. [Photos of Doomed ROSAT Satellite]

Since Earth's atmosphere absorbs most X-ray radiation, ROSAT helped scientists gain a better understanding of the origin, structure and evolution of the universe, according to its mission description. The satellite was designed for an 18-month mission, but greatly outlived its original planned mission.

In 1998, the satellite suffered a malfunction and was irreparably damaged. The German Aerospace Center officially decommissioned the observatory in February 1999. Now, after years adrift around Earth, the satellite's orbit has decayed to the point that it will soon fall from space.

About a month ago, a much larger satellite met a similar demise when it plunged uncontrolled into the ocean. NASA's defunct Upper Atmosphere Research Satellite, or UARS, crashed into the Pacific Ocean, well away from the North American coastline, on Sept. 24. The 6.5-ton UARS satellite was the largest satellite to re-enter Earth's atmosphere uncontrolled since 1979.

At 2.7 tons, the German ROSAT satellite is considerably smaller, but if pieces of debris survive the re-entry process, agency officials predict they could be scattered along a 50-mile (80-kilometer) swath of the Earth's surface.

ROSAT's orbital path reaches from the latitudes of 53 degrees north to 53 degrees south, which means that the satellite could fall anywhere in an area that stretches from Canada to South America.

Still, the odds of any fragments falling onto a densely populated area and causing harm are extremely remote.

German aerospace officials calculated that there is a 1-in-2,000 chance that someone somewhere on Earth will be struck by ROSAT debris. But, given that majority of the planet is covered in water, it is more than likely that ROSAT will not fall over land at all, orbital debris experts have said.

Mission controllers are actively tracking the satellite as its orbit gradually decays, but officials will not be able to make more precise determinations of when and where the satellite will fall until a few hours before ROSAT impacts the Earth.