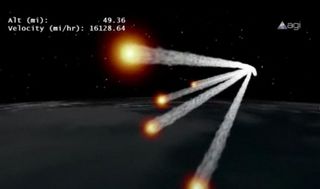 An old German satellite plunged to Earth today (Oct. 22) after languishing in a dead orbit for more than a decade, but officials do not yet know where it fell.

"There is currently no confirmation if pieces of debris have reached Earth's surface," German aerospace officials said in a statement.

While the 21-year-old satellite broke apart as it re-entered Earth's atmosphere, German aerospace officials estimated that up to 30 pieces totaling 1.9 tons (1.7 metric tons), consisting mostly of the observatory's heat-resistant mirrors and ceramic parts, could survive the fiery trip and reach the surface of the planet.

Based on ROSAT's orbital path, these fragments could be scattered along a swath of the planet about 50 miles (80 kilometers) wide, German aerospace officials have said.

The satellite, which weighs 5,348 pounds (2,426 kilograms), was launched into orbit in June 1990 to study X-ray radiation from stars, comets, supernovas, nebulas and black holes, among other things. The satellite was originally designed for an 18-month mission, but it far outlived its projected lifespan. [Photos of Doomed ROSAT Satellite]

In 1998, the ROSAT's star tracker failed and its X-ray sensors pointed directly at the sun. This caused irreparable damage to the satellite, and it was officially decommissioned in February 1999.

The defunct German X-ray observatory was the second satellite to fall uncontrolled from space within a roughly 30-day period. On Sept. 24, a 6.5-ton, decommissioned NASA climate satellite, called the Upper Atmosphere Research Satellite (UARS), plummeted into the Pacific Ocean. The event sparked a media frenzy around the world, and some pranksters even seized the opportunity to create hoax videos and images of the satellite's fall.

Mission controllers initially estimated that ROSAT could fall to Earth in November, but increased solar activity caused the satellite's orbit to decay faster than originally expected. As the sun's activity ramps up, it heats up and expands the atmosphere, which creates more drag on satellites in orbit.

ROSAT's fall from space, and the UARS satellite before it, shone a spotlight on the growing problem of debris in space.

"One option is we want to be able to catch uncontrolled satellites in the future," Jan Woerner, head of the executive board of the Deutsches Zentrum für Luft- und Raumfahrt (DLR), Germany's space agency, told SPACE.com. "We're working on such a mission to catch them, depending on their state, and have a controlled re-entry or send them to a graveyard, in order to prevent this situation in the future."

NASA's bus-size UARS satellite was the largest satellite to fall uncontrolled from orbit since 1979. Skylab, the first American space station, plummeted to Earth in 1979, and debris from the complex plunged into the Indian Ocean and onto parts of Australia.

Also in 1979, NASA's Pegasus 2 satellite, which was launched in 1965 to study micrometeoroids in low-Earth orbit, re-entered the atmosphere uncontrolled and splashed into the mid-Atlantic Ocean.