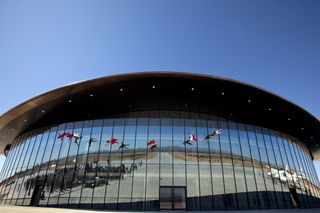 TRUTH OR CONSEQUENCES, N.M. — The hangar at the operating hub for public space travel is being dedicated here today (Oct. 17), home base for pay-per-view suborbital treks out of Earth's atmosphere.

The Spaceport America Terminal Hangar Facility is to be utilized by Virgin Galactic, a spaceline operation backed by British billionaire and adventurer Richard Branson.

The hangar-dedication ceremony is the latest in a string of opening events for the spaceport. In October 2010, officials dedicated the facility's long runway, named "The Governor Bill Richardson Spaceway."

The hangar itself is a Tomorrowland-looking piece of work. It is expected to house up to two of Virgin Galactic's WhiteKnightTwo launch planes and five SpaceShipTwo tourist-carrying rocket planes, in addition to all of Virgin's astronaut preparation facilities and a mission control. [Photos: Spaceport America Blooms in New Mexico Desert]

The Terminal Hangar Facility "has turned out better that anyone could have imagined," said Christine Anderson, executive director of the New Mexico Spaceport Authority.

"It is a beautiful building befitting of the beginning of a new era where all of us can now not only dream of going into space but actually have the opportunity to do so," Anderson told SPACE.com. She said that there are more milestones ahead in anchoring the future of commercial space travel.

Spectators at the dedication event were treated to a flight of the combined WhiteKnightTwo/SpaceShipTwo twosome, circling to high altitude and zooming over Spaceport America.

Branson characterized the terminal design as not only being a real landmark with its iconic architecture, "but also something that was at the cutting edge of environmentally sustainable design."

Branson was in rare form, living up to his adventuresome past – with a keen eye on grabbing the media spotlight.

He joined an aerial ballet group that pranced and flew across the glass edifice of the terminal building. Hanging on a rope tangling attached high on the structure, he popped open a champagne bottle and sipped while announcing that the structure is now named the "Virgin Galactic Gateway to Space."

The Terminal Hangar Facility was designed by United Kingdom-based Foster + Partners, along with URS and local New Mexico architects SMPC. The trio won an international competition to build the first private spaceport in the world.

Now undergoing extensive testing, the SpaceShipTwo craft dubbed the VSS Enterprise, and carrier WhiteKnightTwo, christened the VMS Eve, have both been developed for Virgin Galactic by Mojave, Calif.-based Scaled Composites.

This launch system is designed to haul six customers and two pilots on suborbital space flights, allowing an out-of-the-seat, zero-gravity experience and out-the-window views of Earth from the black sky of space.

"While there is still work to be done in driving to completion of the vehicle development program," Whitesides said, "the dedication event is an opportunity for us to recognize all the people in New Mexico and around the world who have worked so hard to turn a patch of ranch land into the world's first commercial spaceport."

Whitesides said that architectural teams from abroad and here in New Mexico have designed iconic infrastructure that will long be remembered as the first dedicated home for operational commercial spaceships. "We anticipate that over the coming years, thousands of our customers will receive their space training here, preparing for the experience of their lifetimes," he said.

There remains more work on outfitting Spaceport America, Whitesides added. "Over the coming months, we will be working closely with the New Mexico Spaceport Authority," he said, "to finish the overall facilities of the spaceport, including certain infrastructure features and fit-out of the building's interior."

While the festive nature of the dedication was in high gear, much work is ahead to propel trial runs of suborbital jaunts into ticket-holder flight status.

"Since I started, this project for me has been characterized by the fact that, in some ways, what we’re doing is very simple … but actually achieving it is very hard," he told SPACE.com.

Attenborough said that "there’s probably a reason why this hasn’t been accomplished in the last 50 years, because we have to start off with standards of safety that are multiple of anything that has been achieved to date."

"So we should be able to make it," Attenborough concluded.