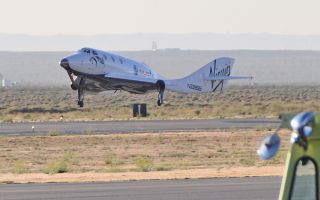 SpaceShipTwo, a privately built rocket plane designed to take tourists on suborbital flights, continues to chalk up more flight time as it glides through the skies over the Mojave Air and Space Port in California.

Another successful glide of the first SpaceShip Two craft, christened VSS Enterprise, took place June 23, marking the 14th glide flight test of the vessel — an 8-minute, 55-second free fall after midair release from its mothership. The test came a week after VSS Enterprise proved it could be flown on back-to-back days.

The two-pilot SpaceShipTwo is designed to rocket six paying passengers on a suborbital trajectory to space without making a full orbit around the Earth. The ride to the edge of space will come at a per-seat price of $200,000.

According to Virgin Galactic, all objectives of the fledgling spacecraft's recent test flights were met.

"This is what Scaled is so good at: flying, testing, and learning in a rapid cycle of innovation. The high flight rate is a positive indication of the vehicles’ ability to fly frequently and safely," he told SPACE.com.

SpaceShipTwo testing is headed for a quiet period starting in July, as the Scaled team analyzes the data from the test flight program to date.

"This summer Scaled will be going through the data to make sure they apply any important lessons … to the next phase of test flights," Whitesides said. "We’re proceeding with the diverse set of tasks required to set up the spaceline, from planning spaceport operations to customer training procedures to ongoing business development."

The test followed another milestone for SpaceShipTwo June 14 and 15: two successful glide flights within 24 hours.

"This was the quickest turnaround time yet between VSS Enterprise solo flights, reinforcing the unique and transformational ability of Virgin Galactic’s spaceflight system to undertake daily flights to space," Virgin Galactic said in a statement.

The June 14-15 flights saw early-morning takeoffs for VSS Enterprise in mated configuration with the WhiteKnightTwo carrier aircraft, followed by high-altitude releases at around 52,000 feet (15,800 meters) and glides back to smooth touchdowns on the Mojave Air and Space Port runway. [Video: SpaceShipTwo Passes Re-Entry System Test]

Both flights were part of a continuing program of envelope expansion, specifically focusing on speed and susceptibility for flutter.

Virgin Galactic sees the quick turnaround between flights as an important factor in its planned commercial operations: daily flights of both carrier aircraft and spaceship, to accommodate the system’s use by both space tourists and researchers.

Since its public rollout in December 2009, SpaceShipTwo has undergone a campaign of piloted glide tests, including two "feathered" flights – involving a configuration in which the rocket plane rotated its tail section upwards to a 65-degree angle to the fuselage.

That novel feathered feature is key to flights in which the craft will return into the dense atmosphere from the vacuum of space. Following re-entry from a full suborbital spaceflight at around 70,000 feet (21,000 meters), the feather lowers to its original configuration and the spaceship becomes a glider for the flight back down to a spaceport runway.

SpaceShipTwo has been put through an ever-expanding set of shakeout objectives, starting with its maiden free flight on Oct. 10, 2010.

On the future flight manifest is a test run using a hybrid motor mounted within SpaceShipTwo. That powerhouse engine is being crafted by Sierra Nevada Corp. Short bursts to ever-longer burns of the motor in-flight are being planned, with the date of the first in-flight firing of the motor still to be determined.

The VSS Enterprise test flight program will continue through 2011.

Commercial operations will be based at Virgin Galactic’s future headquarters at Spaceport America in New Mexico.