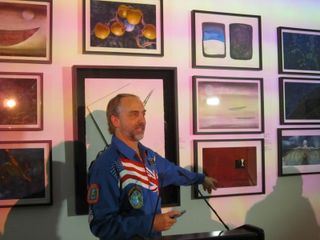 At a reception on Oct. 13, 2011, Richard Garriott, an American space tourist and video game developer, stands in front of pieces of art that were displayed on the International Space Station in 2008. The artwork is part of a free exhibit, called Celestial Matters, at the Charles Bank Gallery from Oct. 14-16 in New York City.
(Image: © Denise Chow/SPACE.com)

NEW YORK — When American space tourist Richard Garriott launched to the International Space Station in 2008, he carried with him a collection of original artwork to display on the orbiting outpost in a unique weightless exhibit. These pieces of art that flew in space, and graced the walls of the space station, are now set to make their terrestrial debut here this weekend.

The Celestial Matters art exhibition features works of art by 10 American artists that were displayed on the International Space Station during Garriott's flight. The show also includes artwork that was created by Garriott himself while he was in orbit.

The free exhibit, which is presented by Zero G Art, opens today (Oct. 14) at the Charles Bank Gallery in Manhattan's Lower East Side, and will run through Sunday (Oct. 16).

The artwork on display is inspired by the intersection of science, technology, space travel, and the innate and insatiable human desire to discover new things and explore new frontiers, said event organizer Heidi Messer-Martin, of Zero G Art. [Photos: The First Space Tourists]

"It's a tribute to what happens when imagination and scientific study meet," Messer-Martin told SPACE.com. "It shows you what the potential of human beings really is. It's the next level of evolution — first, is the ability to do something, and then comes the ability to analyze and process that, and the next step is the appreciation of it. I think art is the culmination of all that."

There's something about space

The Celestial Matters exhibit will be the first time these pieces of art are shown on Earth. They made their debut in space during Garriott's flight, when he became part of an elite group of space tourists who paid millions of dollars to journey to the International Space Station with private aerospace firm Space Adventures.

Garriott's own life is somewhat of an intersection between science and art; his mother is a professional artist, and his father, retired NASA astronaut Owen Garriott, spent just over 59 days in orbit over the course of two missions. The younger Garriott's childhood dream of becoming an astronaut was thwarted by poor eyesight, but he never gave up the desire to fly in space.

"By the age of 13, when I found out I was ineligible to be a NASA astronaut, I became devoted to flying privately, knowing that the only way I was going to go would be if there was a thriving business that took people," Garriott told SPACE.com.

The entrepreneur, who made his fortune in the world of computers and video games, linked up with Virginia-based Space Adventures, a space tourism firm that offers rides to the International Space Station on Russian Soyuz rockets. [Infographic: Spaceships of the World]

Garriott reportedly paid $30 million for his trip, and spent 12 days as a visitor on the orbiting laboratory in October 2008. While in orbit, Garriott paid homage to his artistic and scientific roots through the art exhibit he set up on the space station. He also used the opportunity to create some of his own unique pieces in the weightless environment.

"I think people today feel very separated from spaceflight," Garriott said. "They don't feel tangibly associated with it. This art exhibit in space, and from space, is a great way to humanize this otherwise cold activity and help bring space to the masses. We wanted to bring the inspiration and thinking about space to people in a new and different way."

The artwork highlights the beauty of exploration and discovery, and the importance of continuing to push the boundaries in science, art and life.

"The International Space Station is a symbol of collaboration," Messer-Martin said. "The fact that a private citizen like Richard Garriott, who is totally self-made, could find a way there, and the fact that there are companies like Space Adventures that enable people to get there — I think even ten years ago, it would be beyond peoples' imagination that they could do this. This exhibit is a symbol of human potential in every element, and it's a tribute to that."

The Celestial Matters exhibit can be viewed from noon to 7:00 p.m. EDT at the Charles Bank Gallery, 196 Bowery (at Spring Street) in New York City. It runs from Oct. 14 to 16, and all donations or proceeds from sales will benefit the Challenger Center for Space Science Education, a nonprofit educational organization.