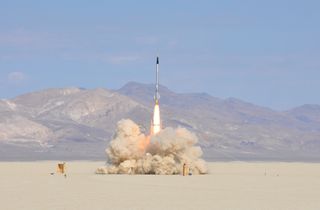 A team of amateur rocketeers has launched a small unmanned vehicle into the stratosphere in pursuit of a $10,000 prize offered by computer game developer turned aerospace pioneer John Carmack.

And the rocket launched by Team Qu8k (pronounced "quake") may just be the booster to beat. The amateur rocket reached well above the required 100,000 feet (30,480 meters) on Sept. 30, team members say. The team managed to recover their craft essentially intact, as stipulated in the guidelines of Carmack's "100kft Micro Prize." A GPS system glitch was the only malfunction.

Carmack, who leads the Texas-based private spaceflight company Armadillo Aerospace, is a co-founder of id Software, the computer game company behind the popular "Doom" and "Quake" titles. He and other contributors are offering a total of $10,000 to the first team to launch a small rocket to an altitude of 100,000 feet, have it descend back to Earth on a parachute and then recover the vehicle.

The Qu8k rocket's GPS systems failed to register a reading confirming the rocket's altitude. But accelerometer data and other measurements provide ample proof, according to the rocketeers, so they're still holding out hope. [Video of Team Qu8k's Launch]

"We're confident that we broke 100,000 feet, so I'm going to put it back to him [Carmack]," team leader Derek Dee Deville said. "We have, I think, clear evidence, and maybe they'll let it fly."

Carmack announced the prize in February of this year. In addition to the altitude and recovery requirements, competitors must also write a high-quality report about the launch and make video of it available.

"The prize is meant as a sponsorship of a nice public report on a rocket launch," Armadillo officials wrote on the company's website. "There is also an implied goal of reducing the frequency of claims that launching a rocket to 100,000' is easy."

Carmack offered $5,000 to the first individual or team to meet the prize's requirements. Other contributors ponied up an additional $5,000, bringing the purse to an even $10,000.

But Florida-based Team Qu8k isn't in it for the money. The rocket and its launch cost well in excess of the prize, team members said. [Vote Now! The Best Spaceships of All Time]

"It's more of a passion than anything else," Deville told SPACE.com.

Though his day job involves designing medical devices, Deville has a long track record in rocketry.

For example, he built the motors for the Civilian Space Exploration Team's GoFast rocket, which in 2004 reached an altitude of 72 miles (116 km) — well above the 62-mile (100-km) boundary delimiting outer space.

Deville said he learned about Carmack's challenge over the Fourth of July weekend and decided to give it a go. By early August, Team Qu8k was bending metal, and by Sept. 30 the 14-foot-tall (4-m) rocket was sitting in Nevada's Black Rock Desert, ready to fly.

The launch went well, team members said. The rocket made it up to 121,000 feet (36,881 m), descended gently via parachute and landed less than 3 miles (5 km) from the launch site, they added. However, Qu8k's GPS systems didn't perform as hoped, failing to lock on and register a firm altitude reading at the top of the rocket's flight.

The team is confident in their altitude figure, which they say is based on knowledge of the rocket's flight time and readings from its accelerometer. So they're hoping they may still win Carmack's challenge.

Deville and Mayback stressed that they're not trying to influence Carmack in any way; they recognize that it's his call and will accept what he decides.

And whether they win the prize or not, Team Qu8k members say they're going to keep on building and launching rockets. Deville, for example, wants to reach outer space again. And unlike the GoFast vehicle — which was built to get to space, not document the journey — the next rocket spaceflight might show some pretty pictures to folks on the ground.

"It'd be nice to take the HD video setup that we have now, and maybe put some really nice high-resolution still cameras in there, and get them up high, get some shots," Deville said.