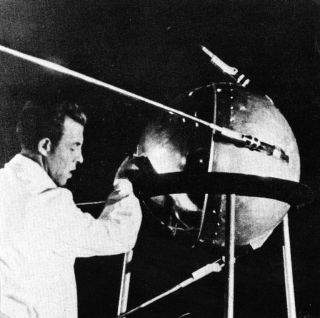 Fifty-four years ago today (Oct. 4), the Soviet Union launched Sputnik 1, the world's first artificial satellite, and humanity's race into space began. Now a weeklong international space celebration marks that date and highlights all the good that has come from reaching for the stars.

The 12th annual World Space Week kicks off today, with organizations around the globe holding events to acknowledge the contributions of space science and technology to life on Earth. This year's festivities will focus on the theme "50 Years of Human Spaceflight," a nod to cosmonaut Yuri Gagarin's historic orbital flight of April 12, 1961.

Activities this year include a Czech student's flight on a zero-gravity plane, a workshop about space technology applications in Vietnam and a public talk by European Space Agency astronaut Hans Schlegel in Melbourne, Australia.

"What we hope to do is bring attention to space itself, its uses and the exploration and utilization of space as it can benefit humankind and improve the socioeconomic status of people around the world," said Angela Peura, the Washington, D.C. representative of the World Space Week Association. [Rocket Science in Your Car: 7 Space Technologies On the Road]

World Space Week is the largest annual public space event in the world, organizers said. It takes place every year from Oct. 4-10.

Both of those dates mark key developments in the history of space exploration. Sputnik I launched on Oct. 4, 1957, and the Outer Space Treaty, which forms the basis for international space law, came into effect on Oct. 10, 1967.

The United Nations established World Space Week in 1999, and the event was first held a year later. The U.N. continues to help coordinate the annual celebration, according to the World Space Week Association.

Last year, 332,000 people around the world participated in 585 reported events, which were spread across 63 nations, World Space Week officials said.

Inspiring the next generation

World Space Week doesn't just seek to educate people about space and the benefits of space exploration, Peura said. Another goal is to use space to help hook kids on science and technology in general, helping to inspire the next generation of scientists and engineers.

"Everyone thinks space is cool," Peura told SPACE.com. "So bringing attention to the outreach and education is really what World Space Week is all about."

While a number of World Space Week events are being held in the United States and Europe, many others will take place in countries without much of a spaceflight history, such as Afghanistan and Nigeria.

To see if any activities are happening near you, check out www.worldspaceweek.org.