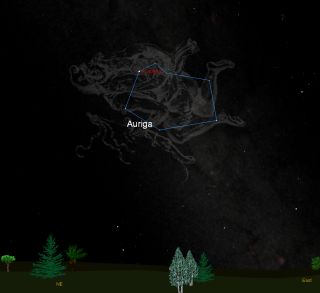 This sky map shows the location of Capella, a bright star also known as the "Goat Star," in the constellation Auriga, the Charioteer, as it appears in the northeastern sky at 1 a.m. local time at mid-northern latitudes.
(Image: © Starry Night Software)

An object that has been attracting the attention of those who normally give the night sky only a casual glance is the planet Jupiter, which makes its first appearance low above the eastern horizon shortly after 9 p.m. these evenings.

But I have also been getting inquiries of late about another unusually bright, starlike object, this one low in the north-northeast sky soon after it gets fully dark. It isn't so much that it is bright — it's just that it looks out of place since usually you don’t see such a bright star located so far to the north.

The object also sometimes seems to twinkle with a yellowish-orange when it stands just above the horizon. In a couple of cases, I’ve been asked if the mysterious object is Mars. And back in the mid-1970s, when I was camping in the Adirondack Mountains of northern New York, some of my fellow campers swore that they were looking at some sort of UFO! [7 Things That Create Convincing UFO Sightings]

The sixth-brightest star in the sky

What those folks were looking at, in fact, is not a planet, but a brilliant star with a distinct yellowish hue.  In fact, it's the sixth-brightest star in the sky (magnitude 0.08). As seen from mid,northern latitudes, it ranks number four behind Sirius, Arcturus and Vega. The star in question is Capella, in the constellation of Auriga, the Charioteer.

Auriga is one of those star patterns whose exact origin is a hopeless mix of antique conceptions. We might call him the "Ben Hur of the sky." The Greek and Roman legends made Auriga a famed trainer of horses and the inventor of the four-horse chariot.

But the most ancient legends also had Auriga as a goatherd and a patron of shepherds. The brilliant golden-yellow Capella was known as the "Goat Star," with a nearby triangle of fainter stars representing her kids.

The confusion in concepts is reflected in the ancient allegorical pictures and star names. Auriga is usually represented holding a whip in one hand in deference to the Charioteer story, but in his other arm he is holding a she-goat (Capella) and her three kids. [Top 10 Star Mysteries]

In his classic guidebook, "The Stars, A New Way to See Them" (Houghton Mifflin Company, Boston), Hans A. Rey (1898-1977) drew Auriga looking like a man with a tough expression with a jutting chin and a pug nose, " . . . as befits the driver of a war cart."

Bigger and brighter than the sun

Capella measures 16 times as large across as our sun, 174 times as luminous, and is located 42 light-years away. And it is, in reality, part of a multiple star system with at least four components.

As I noted earlier, Capella appears to rise well to the north of due east. In fact, it is the nearest to the sky's North Pole of all the first-magnitude stars, and across much of the 48 contiguous United States it is visible at some hour of the night throughout the year.

From New York City, for example, Capella is below the horizon for only about 3 hours out of a 24-hour day. Lying 46 degrees north of the celestial equator, Capella can pass directly overhead for anyone living at that latitude north of the terrestrial equator (say, Houlton, Maine or Geneva, Switzerland). And for anyone living at points north of latitude 44 degrees (for example, Minneapolis, Minn. or Bologna, Italy), Capella will appear to graze the northern horizon, but will not go below it.

In the table below, we have prepared the rise times for Capella for three dates this week (September 16, 19 and 22) as seen from 10 different latitudes, each separated by 2-degree increments. Also provided for each latitude is the azimuth, the direction on the horizon where Capella will first appear. As already noted, from latitude 44 degrees and all points north, Capella is always above the horizon.

All times are given in civil or local daylight time (LDT), which differs from ordinary clock time by many minutes at most locations. Most civil time zones worldwide have been standardized on particular longitudes at increments of 15 degrees. As an example, across Europe, 0 degrees (the Greenwich Meridian); 15 degrees east; 30 degrees east, etc.

Across North America, there is 60 degrees west (Atlantic Time), 75 degrees west (Eastern Time), 90 degrees west (Central Time), etc. If your longitude is very close to one of the standard meridians, luck is with you and your correction is zero.

But since Columbus is located 8 degrees west of the standard meridian, we must add 32 minutes to 8:03 p.m. So Capella will actually rise at 8:35 p.m. And from the latitude of Columbus, Capella will appear to rise 19 degrees east of due north, or about "two fists" to the east (right) of due north.

For other dates and latitudes, you can interpolate.

Interestingly, the brilliant blue-white star Vega is only a trifle brighter and lies almost diametrically opposite in the sky from Capella. At about 39 degrees from the celestial equator, Vega affords a similar rising reference for northern sky watchers in the early spring sky.