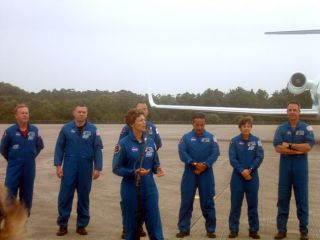 CAPECANAVERAL - The next astronaut crew of the space shuttle Discovery arrived attheir launch site today, flying in under a cloudy sky but looking forward to aJuly 13 space shot that NASA hopes will be the first orbiter launch since the Columbia disaster.

Clad inblue flight suits, STS-114 commander Eileen Collins and her six fellow crewmatesstepped off their transport plane and onto the runway here at NASA's Kennedy Space Center (KSC) at about 6:30p.m. EDT (2230 GMT). Their arrival, originally slated for July 10, was pushedup a full day on Friday due to the Gulf Coast approach of Hurricane Dennis.

"This shuttleflight is the beginning of a new chapter in space exploration, we're going tofinish building the space station and do the science up there that needs to bedone," Collins said. "It's going to be a very exciting time...people's heartsare beating."

Discovery'sSTS-114 mission is NASA's first scheduled shuttle flight since the 2003Columbia accident that destroyed one orbiter and killed seven astronauts. Columbia broke apart while reentering the Earth's atmosphere on Feb. 1, 2003 after hotgases penetrated its wing through a hole gouged by launch debris two weeksearlier at liftoff.

"It's beentwo and a half years since a crew stood here before you, and that's way toolong," said STS-114 mission specialist Andrew Thomas. "It is definitely time thatwe went back to flight and back to space."

Discoveryis currently sitting atop KSC's Launch Pad 39B, where engineers are preparingit to launch on July 13 at 3:51 p.m. EDT (1951 GMT) mission. The spaceflight'slaunch window stretches through July 31.

The STS-114mission is the first of two scheduled shuttle launches to shakedown new orbiterhardware and procedures to inspect the spacecraft in orbit and increase flightsafety. NASA has spent the last two and a half years modifying shuttle externaltanks to prevent the type of debris damage that doomed Columbia, and to reduceice buildup on critical areas where managers feared it could shake loose duringlaunch.

Discovery'supcoming spaceflight will also be the first orbiter to visit the InternationalSpace Station since December 2002, and will carry a cargo module laden withfood, supplies, equipment and spare parts for the orbital facility.

"I am veryproud of this crew that's standing behind me," Collins told reporters. "Theyare very prepared and ready to fly this mission."