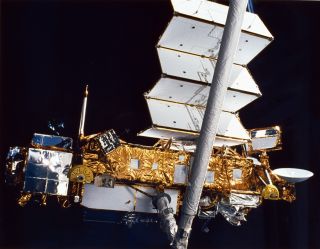 The Upper Atmosphere Research Satellite hangs in the grasp of the Remote Manipulator System against the blackness of space during deployment from Space Shuttle Discovery, September 1991.
(Image: © NASA Marshall Space Flight Center)

A dead NASA satellite the size of school bus is falling back to Earth, and where it will drop no one knows, at least not yet. The space agency is clear, however, on where the satellite's debris will not end up: eBay.

As NASA waits to learn where the Upper Atmosphere Research Satellite (UARS) will fall, the space agency has alerted the public not to touch any debris that may be found. The space agency wants to protect the public's safety, but also enforce the law. UARS remains U.S. government property, regardless of whether it is circling the Earth intact or lying on the ground in pieces.

Launched in 1991 from the space shuttle Discovery, the UARS completed its mission studying the chemicals in Earth's atmosphere in 2005 and since then has been gradually falling out of orbit. U.S. Strategic Command at Vandenberg Air Force Base, Calif., which tracks man-made objects circling the planet, expects UARS to plunge back to Earth during the last week of September.

"We do know with 99.9 percent accuracy that it'll reenter the atmosphere somewhere between 57 degrees north and 57 degrees south, which means it will be anywhere from northern Canada to southern South America and that is truly the best estimation we can give you at this point of time," Duncan told reporters on Friday (Sept. 9). "It takes until it gets much closer to the actual reentry time before we can give any sort of prediction better than that."

NASA's orbital debris program analyzed UARS's design in 2002 with the purpose of determining what, if any parts of the satellite would survive the fiery reentry and make it to the ground.

"We believe there will be 26 different components that will hit the surface of the Earth somewhere with a total mass of a little over 500 kilograms [1,100 lbs]," NASA's orbital debris program chief scientist Nick Johnson said. "The largest piece that we think is going to come back is part of the structure of UARS and it is going to have a mass of just in excess of 150 kilograms, so a little more than 300 pounds."

There is a 1-in-3,200 chance that one of those pieces will land on someone somewhere in the world. Those odds are "very, very low" Johnson said, pointing out that in the 54-year history of the space age, "there have been no reports of anybody in the world being injured or severely impacted by any re-entering debris."

But pieces do make it to the ground.

"Typically, we find one piece a year from these reentries," Johnson said, describing moderate-size objects. UARS is significantly larger.

Most of the world's population lives within the region where UARS may fall. Should any of them be under the satellite when it comes back to Earth, they may be in for quite the sky show.

"If they are fortunately positioned, this should be quite a nice show," Johnson said. "It's a relatively large vehicle. It would be visible in the daylight."

"Odds are though, it will happen over an ocean, unlikely to be seen unless it is by an airliner — and we've had reports like that before. Since we don't know where it is going to come in, we can't raise people's expectations and tell them to go out and look in the backyard," he said.

Even so, NASA is already warning the public through its website that should they find something they think may be a piece of UARS, "do not touch it."

"We always tell people not to go pick things up because that is always safe," Johnson said. "You are much more likely to get cut by some sharp edge on a piece — there are no hazardous materials [and] there are no radiological materials [aboard]. So it is always best to leave it where it is, notify your local authorities and they will contact us and we will work whatever needs to be worked."

Depending on the nature of the debris — whether a large tank or a small nondescript component — that work is more likely to be about safely disposing of the debris than recovering it for scientific study.

"Obviously when a tank is found, or another component is found around the world, we do have an interest in it. We go try to verify the identity but most of the time, it is a very large tank, it is made out titanium or stainless steel, and we know very well that those are going survive. They may not ever be found, but we know they are going to survive. So there really is not a whole lot we can learn from those tanks," Johnson said.

"The smaller components that also might survive are rarely recognized for what they are. You know if you're out walking on a pasture or in the woods and you see this hunk of metal out there, you're first assumption is not that it is some part of a satellite that fell to Earth. But we do get calls and e-mails from people around the country on a regular basis about things they think they found that may have come from a reentering satellite. And almost without exception, they're found to have some other source," he said.

Continue reading at collectSPACE.com to learn why the public does not have the "luxury" to sell UARS's debris on eBay and why where the satellite falls could redefine "finders, keepers."