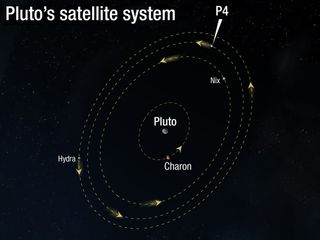 Pluto is so far away from Earth that everything we know about it can be written down on a couple of 3 x 5 inch index cards. But Pluto will come into clearer focus in a few years' time, though, as NASA's New Horizons probe is due to make a close flyby of the dwarf planet in July 2015, marking the first time a spacecraft has ever visited the frigid, faraway world.

For now, though, here are the five strangest facts about Pluto, the former ninth planet in our solar system:

1. Pluto used to be giant

When Pluto was discovered (by American Clyde Tombaugh in 1930), it was initially believed to be larger than Mercury, and possibly bigger than Earth. Now astronomers know that it's about 1,455 miles (2,352 kilometers) across — less than 20 percent as big as our planet. And Pluto is just 0.2 percent as massive as Earth. [Photos of Pluto and Its Moons]

Pluto has an extremely elliptical orbit that's not in the same plane as the eight official planets' orbits. On average, the dwarf planet cruises around the sun at a distance of 3.65 billion miles (5.87 billion km), taking 248 years to complete one circuit.

It's strange orbit means that, for a few years at a time, Pluto's orbit overlaps with Neptune's. This brings Pluto closer to Earth than Neptune, the eighth planet from the sun. Don't worry, though, Pluto and Neptune won't collide.

Because it's so far from the sun, Pluto is one of the coldest places in the solar system, with surface temperatures hovering around minus 375 degrees Fahrenheit (minus 225 degrees Celsius). Scientists think the dwarf planet is about 70 percent rock and 30 percent ice. Its surface is covered predominantly with nitrogen ice. [Pluto: A Dwarf Planet Oddity (Infographic)]

Once seen up close, Pluto's surface could turn out to have cold-liquid-belching cryovolcanoes or geysers. A giant underground ocean could exist as well, and clues to its presence could be inferred by the geology or chemistry of Pluto's surface.

Pluto has four known moons: Charon, Nix, Hydra and a newly discovered tiny satellite called P4 for now (its final name may end up being Cerberus). While Nix, Hydra and P4 are relatively small, Charon is about half as big as Pluto.

Because of Charon's size, some astronomers regard Pluto and Charon as a double dwarf planet, or binary system — the two bodies are gravitationally locked, and always present the same face toward each other as they orbit a common center of mass located somewhere between them.

Despite being smaller than Earth's moon, the dwarf planet has managed to hold on to a thin atmosphere — composed mainly of nitrogen, methane and carbon monoxide — that extends about 1,860 (3,000 km) into space.