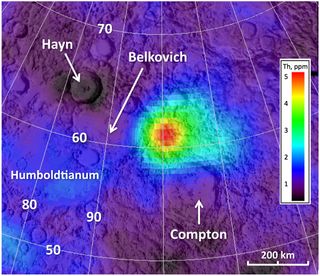 This image from NASA's Lunar Reconnaissance Orbiter shows a region on the far side of the moon between the Compton and Belkovich craters. The colored region marks a high amount of the mineral thorium, which is thought to have been deposited by rare silicate volcanoes in the past.
(Image: © NASA/GSFC/ASU/WUSTL, processing by B. Joliff)

Shielded from Earth-bound eyes, the far side of the moon is home to a rare set of dormant volcanoes that changed the face of the lunar surface, a new study finds.

"Most of the volcanic activity on the moon was basaltic," primary author Brad Jolliff of Washington University told SPACE.com in an email. "Finding other volcanic types is interesting as it shows the geologic complexity and range of processes that operate on the moon, and how the moon's volcanism changed with time." [Photos of the dormant far side moon volcanoes]

Searching the far side

Because the moon's rotation has been affected by tidal forces between the Earth and the moon, only one side of the moon is visible from the Earth. The far side of the moon — sometimes referred to inaccurately as the "dark side" — was hidden from view until 1959, when Soviet Union's Luna 3 spacecraft took the first photos of the region.

When NASA's Lunar Prospector probe circled the moon in 1998, it revealed a highly reflective plain lying between two ancient impact craters. Known as the Compton-Belkovich region, this part of the moon contains thorium and other silicate rocks, suggesting a more involved type of volcanic activity than that which created the moon's well-known dark plains of basaltic plains known as "maria," or "seas."

But it wasn't until the LRO captured higher-resolution images for the region could this volcanic activity be confirmed. The spacecraft found a number of domelike features with steeply sloping sides — telltale signs of lunar volcanoes.

Jolliff said that the domes likely formed by lava probably came from deep within the moon. It flowed upward through cracks to pool just beneath the surface, where it pressed out to form large domes.

Lava continued to work its way to the surface throughout the area, building other, smaller volcanic domes. Some areas then collapsed, creating the irregular depressions observed by LRO's camera, researchers said.

The research is detailed in the July 24 edition of the journal Nature Geoscience.

Rare volcanoes on the moon

Most volcanoes, on Earth and off, are near other volcanoes. But the grouping in the Compton-Belkovich region is isolated.

"This small volcanic complex occurs far away from the part of the moon where most of the volcanic activity was concentrated, and where other silicic volcanism occurred," Jolliff said. "That's a puzzle." [10 Coolest Moon Discoveries]

Older, defunct volcanoes are not themselves uncommon. Scientists have known for years that volcanoes on the moon filled in craters to form the dark maria visible from Earth's surface. However, those lava flows are basaltic in nature.

The team also used the Diviner Lunar Radiometer Experiment to confirm the type of rocks on the plain.

"Very few minerals have an infrared spectrum that can explain Diviner's observations of Compton-Belkovich and the other nonbasaltic volcanoes on the moon," study co-author Timothy Glotch of Stony Brook University told SPACE.com via email.

In fact, the rocks were silicate-rich.

"We've known for awhile that the Compton-Belkovich had an unusually high thorium content," Glotch said. "Now we can positively say that that thorium is related to these silicic volcano materials."

Volcanoes on the moon

Last fall, Glotch, working with another team, was the first to identify nonbasaltic volcanoes on the near side of the moon. Due to their highly reflective surface, this group was also originally noticed by the Lunar Prospector.

However, lava from the surrounding maria may have also concealed details of the volcanoes, so some details of the region's geologic history could have been hidden, researchers said. But the volcanoes on the far side have no maria nearby to hide their features. The complete view of the volcanism in the area lies open to examination.

Similarly, they are surprisingly free from impact craters, which reveals a great deal about their age, researchers added.

The early life of the solar system was violent, with rocks scarring the surface of the planets and their moons. Features that lack this scarring formed after things had calmed down.

Jolliff and his team estimated the age of the moon's rare far side silicate volcanoes to be about 800 million years old. Such an age would extend the volcanic activity of the moon by 200 million years, they said.

According to Glotch, the discovery of nonbasaltic volcanoes on the far side of the moon "shows that the moon is more compositionally diverse than we realized before this new age of lunar exploration."

"As scientists, we're still digesting all this relatively new data and working to understand what it means in terms of lunar history."