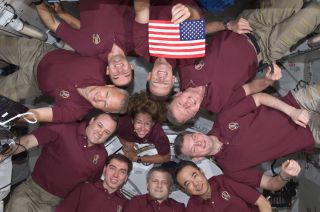 In an occurrence which became somewhat of a tradition for shuttle crews and those of the International Space Station expeditions, the Expedition 28 crew and the STS-135 Atlantis astronauts formed a microgravity circle for a portrait aboard the orbiting complex's Kibo laboratory of the Japan Aerospace Exploration Agency. This image was taken on July 15, 2011 during NASA's final shuttle mission STS-135 aboard Atlantis.
(Image: © NASA)

When the four astronauts on NASA's shuttle Atlantis said goodbye to the six-man crew of the International Space Station today (July 19), it marked the end of a crowded space week that won't be repeated for years.

The Atlantis crew is flying NASA's last flight the 30-year shuttle program and their mission is likely the final time a 10-person or more crowd will be at the space station. The shuttle undocked from the space station for the last time today at 2:28 a.m. EDT (0628 GMT).

"All the tons of cargo that have arrived from Atlantis have filled this place up," Garan said earlier in the mission. "There's a lot less room for us humans. That's really important because we're outfitting this station to function for the rest of the decade. Atlantis has really set us on a pace for doing that. We're going to miss these guys a lot. It's been really wonderful having them up here. It's great to have visitors, especially great visitors like these guys."

All 10 spaceflyers gathered on July 14 for an "All-American Meal" of chicken, corn, baked beans and apple pie.

NASA shared the space food recipes online so the public could cook their own feast and share a virtual meal with the crew. It was a special moment that enabled the members of both crews to enjoy their time together and share memories and stories from their previous spaceflights. [Space Food Photos: What Astronauts Eat in Orbit]

"It was a fantastic meal. We shared it with our American, Japanese and Russian counterparts down on the mid deck [of Atlantis]," Ferguson said. "We shared our memories of our earliest memories of the astronaut office, shared things we have in common. We did reminisce a bit about the upcoming end of the shuttle. It was the last joint meal we're going to have on the space shuttle. It was a sobering, somber moment"

The most crowded the International Space Station has ever been was during times with 13 people together in orbit, which occurred when a visiting seven-person shuttle crew met up with a full six-person station crew. The last time that happened was during the shuttle Discovery's STS-131 mission in April 2010.

When Atlantis lands on July 21, NASA will officially retire its three-orbiter shuttle fleet to make way for a new program aimed at deep space exploration. After that, the agency will rely on commercial providers to ferry supplies to the space station and Russian-built Soyuz spacecraft to bring astronauts to and from the orbiting outpost.

Soyuz vehicles only carry three people each. While Atlantis is carrying a smaller-than-normal crew of four, most shuttle flights have had crews of six or seven astronauts.

Two NASA shuttle missions carried rare crews of eight astronauts. The STS-61A flight of 1985 was the first packed shuttle to launch and land with eight people, while the STS-71 mission by Atlantis to Russia's space station Mir in 1995 only hit the eight-person mark during the trip home when three Mir crewmembers hitched a ride back to Earth on the shuttle, according to NASA records.

Atlantis launched on July 8 and arrived at the space station two days later for one final visit.

After the shuttle departs at the end of its mission, the space station will likely remain home to no more than six people at one time for several years, until a new spacecraft in addition to the Soyuz vehicles is ready to transport astronauts.

Several private companies, such as Boeing and SpaceX, are in the process of developing new commercial spacecraft that could take passengers to the space station, but the first manned flights of these next-generation vehicles are still years away.

"The last visit by the shuttle crew, and last visit of as large a crew by the space station, I know the significance of that is felt by the astronauts onboard," lead shuttle flight director Kwatsi Alibaruho said in a news briefing after Atlantis docked to the station.

Atlantis and its four-astronaut crew delivered about 9,500 pounds (4,300 kilograms) of food, clothing and spare parts to the orbiting lab to help keep the station operating through 2012.

"We are making a rather large delivery, and a lot of our time is being spent moving things onto the station and bringing things back into our cargo carrier," shuttle mission specialist Sandra Magnus said. "We're leaving behind about a year's supply of food and consumables as well as about 1,000 pounds of science equipment and some spare parts. It's keeping us pretty busy, but the station will be in good supply once we leave."