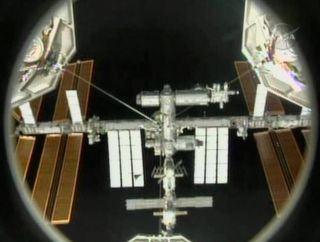 This NASA still taken from a sequential video camera on Discovery shows the International Space Station as it appeared on April 7, 2010 just before the two spacecraft docked during NASA's STS-131 mission.
(Image: © NASA TV.)

The shuttle Discovery linked up to the International Space Station early Wednesday, bringing 13 people together on two different spaceships — including the largest orbital gathering of female astronauts in history.

Discovery docked at the space station at 3:44 a.m. EDT (0744 GMT) in a flawless orbital rendezvous despite the failure of a main antenna dish usually used to provide radar data during shuttle approaches. The shuttle is hauling tons of fresh supplies and equipment for astronauts living on the nearly complete station.

"Houston and station, capture confirmed," Discovery pilot Jim Dutton said. The two spaceships were flying in darkness 215 miles (346 km) over the Caribbean sea at the time.

The hatches between the two spacecraft were opened at couple of hours later, giving Mission Control their first television views of Discovery's crew since the astronauts launch. The shuttle's antenna failure had prevented such broadcasts.

"The crew made it look easy, so that all went well," lead shuttle flight director Richard Jones told reporters after the docking.

The station astronauts rang a ceremonial bell to welcome their shuttle crewmates to the orbiting lab. The baker's dozen of astronauts includes nine men and four women, the latter being a new record for the most women in space.

Caldwell is the only one of the four female astronauts in orbit not flying on Discovery. She is part of the station's Expedition 23 crew, where she serves as a flight engineer.

The other three women are on Discovery, a mix of aerospace engineers and a teacher-turned spaceflyer. One of them, Naoko Yamazaki, is Japan's second female astronaut and is joining her fellow Japanese spaceflyer Soichi Noguchi on the station — the first time two astronauts from Japan have met up in space.

"Soichi-san, we are coming soon. Looking forward to it," Yamazaki said just before docking. Noguchi said he looked forward to seeing her smile.

The 13 people gathered together on the linked shuttle Discovery and station tie the record for the largest orbital crowd in one place in space.

Discovery is hauling a cargo module packed with 17,000 pounds (7,711 kg) of science experiments, supplies and other gear for the space station — including a new astronaut bedroom and a new system that can create water from waste hydrogen and carbon dioxide gases. The shuttle launched into space on Monday.

The astronauts also plan to deliver a hefty new gyroscope and ammonia cooling system tank for the space station's exterior. The parts are so big, only NASA's space shuttles can carry them.

It will take three spacewalks to install them on the space station, with the first set to begin on Friday.

A back flip in space

Before Discovery docked at the space station, shuttle commander Alan Poindexter guided the 100-ton spacecraft through a graceful back flip while flying 600 feet (183 meters) below the station.

"It's almost poetry," Jones said of the shuttle's flip.

The orbital flip is a standard shuttle event that allows astronauts inside the space station to take more than 300 high-resolution photos of the heat shield tiles lining Discovery's belly. The photos will be beamed to Mission Control so engineers can study them to determine health of Discovery's heat shield.

"You guys are looking be-yoo-tiful," Noguchi said after the photo session.

The pre-docking photo session is one of several safety inspections performed on every shuttle mission since NASA's 2003 Columbia disaster, in which heat shield damage led to the loss of the Columbia orbiter during re-entry. Seven astronauts were killed in the accident.

But because Discovery's main Ku-band antenna — which is used to transmit large data files to Earth — is not working, the shuttle astronauts had to record all 40 gigabytes of inspection data on tape. They'll beam it down to Earth overnight tonight using the space station's communication network, mission managers said.

"It'll be awhile before we get all that down," Jones said. The astronauts transferred the data into a hard drive and physically installed into a different computer on the space station in order to send it to Earth.

On Wednesday night, Discovery's crew is due to pluck the cylindrical cargo pod out the shuttle's payload bay, and then attach it to the space station so it can be unloaded over the next week. The Italian-built cargo pod, called Leonardo, is about the size of a small bus and will be moved into position using robotic arms.

Discovery is currently flying one of NASA's last few shuttle missions planned before the agency retires its three-orbiter fleet in the fall. Three more shuttle flights are scheduled after this one.