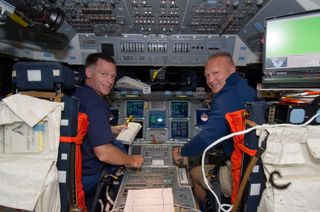 NASA astronauts Chris Ferguson, left, and Doug Hurley are pictured at the commander's station and pilot's station, respectively, on the flight deck of the space shuttle Atlantis during the mission's second day of activities in Earth orbit.
(Image: © NASA )

HOUSTON — Two of the last astronauts to fly aboard a space shuttle took time out from their busy mission today to answer kids' questions about life in orbit — such as, "Are spacesuits itchy?"

"Actually, spacesuits aren’t itchy, even the ones when we go outside and do a spacewalk," said astronaut Rex Walheim, a mission specialist flying on the space shuttle Atlantis' final mission, which is called STS-135. "We have a nice undergarment that we wear there and it's not itchy at all, and it also has water tubes in it that go up and down and keep you cool."

Walheim is one of four spaceflyers making the 135th and final voyage on a space shuttle. Atlantis launched July 8 on a 13-day flight to stock up the International Space Station with spare parts for the years to come. After this mission, NASA's three space shuttle orbiters will be retired to museums.

The questions were from middle school students participating in NASA's Summer of Innovation program. Another student asked, "How do you feel about this being your last launch up to space?"

"Thank you for that great question from Burbank middle school," Atlantis' pilot Doug Hurley said. "You know it's just the last shuttle launch for us — that doesn't mean we can't fly in space again. There are still lots of opportunities to fly folks aboard Russian Soyuz rockets to the space station, and we've got some commercial companies that are building rockets now, so maybe a ride on one of their rockets in the near future." [Top 10 Fantasy Spaceships Headed for Reality]

It isn't just among school kids that NASA is fighting the perception it's getting out of the space exploration business. The agency is working hard to convince the public that the upcoming gap in U.S. space transportation is just temporary. NASA is encouraging commercial firms to build spacecraft to take over the job of ferrying cargo and humans to the International Space Station, which is set to run until at least 2020. [Video: Obama Talks Future in Call to Space Station]

Meanwhile, NASA plans to develop a spaceship capable of flying beyond low-Earth orbit.

"Where should we go next? The moon, an asteroid or Mars?" asked a student named Alexis.

"Thanks, Alexis — that's a great question," Hurley responded. "Me, personally, I would love to go to Mars, but an asteroid or the moon would be very exciting as well."

President Obama has officially challenged NASA to send humans to an asteroid by 2025, and to Mars by the mid-2030s.

The space shuttle Atlantis astronauts woke Saturday night at 10:59 p.m. ET (0259 GMT) to begin their 10th day in space. Today is a quiet day for the crewmembers, who are wrapping up their work unpacking the 9,500 pounds (4,300 kilograms) of supplies delivered by Atlantis to the space station, and repacking about 9,500 pounds of trash and other cargo to be returned to the ground.

"By volume there is a lot of foam" packed on the orbiter for the trip back down, space station flight director Chris Edelen told reporters during a briefing today (July 17). "Every mechanical system, ORU [orbital replacement unit], comes up in protective foam. That was one of the key objectives of this flight, was to bring down foam."

The astronauts are also taking some well-deserved time off today to look out their spacecraft's windows and bask in their experience before leaving the orbiting laboratory. That down time includes plugging in to iPods, according to an answer to one student's question about whether the astronauts listened to music in space.

"I was just having a little trouble sleeping in," Walheim said. "I got to listen to my favorite songs before we woke up this morning."

However, the crew didn't get to rest as much as planned, because the packing work ended up bleeding over into the astronauts' spare time.

"The timeline was very tight," Edelen said. "Unfortunately, they had to work through some of their off-duty time."

Atlantis is scheduled to close its hatch on the International Space Station on Monday (July 18) and undock from the outpost early Tuesday (July 19).

The shuttle is slated to touch down on July 21 near where it launched at NASA's Kennedy Space Center in Florida, bringing the space agency's 30-year shuttle program to a close.