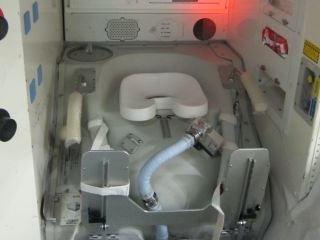 A mock-up of the bathroom on the space shuttle at Johnson Space Center in Texas.
(Image: © Stephanie Pappas )

HOUSTON — Even soaring high above Earth on a high-tech space station doesn't excuse astronauts from the most mundane household chores … especially when you're dealing with a smelly space toilet.

Earlier this week, the station crew reported a foul odor coming from one of the orbiting lab's toilets. After some tinkering, the astronauts and Mission Control began to suspect that air bubbles had clogged up some of the $90 million orbital commode's delicate plumbing. [Space Toilet Technique: NASA's How-To Video]

Today, Garan, fresh off a 6 1/2-hour outing yesterday that marked the final spacewalk ever to be performed during a NASA shuttle mission, swapped his spacewalking gear for plumbing tools.

"That's the great thing about spaceflight," said station astronaut Mike Fossum, who served as Garan's spacewalk partner. "One day you're outside spacewalking, doing the most outrageous things the humans have ever done. The next day you're fixing toilets and unpacking boxes." [Historic Photos: Final Spacewalk of NASA's Shuttle Era]

For his part, Fossum spent the day moving supply containers out of a bus-size cargo pod delivered to the station earlier this week by the four astronauts flying aboard Atlantis. The flight is NASA's final shuttle mission before the agency retires the 30-year program later this year.

"It's all in the life of an astronaut," Chris Edelen, lead space station flight director, told reporters in a news briefing today.

The station toilet was left alone yesterday while the astronauts completed their spacewalk, and the crewmembers since reported that the unpleasant smell appeared to go away on its own. Still, the station crew took the opportunity to replace some older parts in the space toilet, especially since they're playing host to Atlantis' four-astronaut crew.

"We want to be good hosts and have a toilet there that works," Edelen said, adding that the system is now fully operational. "We even invited the shuttle crewmembers to use it if they need to."

The station actually has two space toilets available for its crew's convenience. One potty is on the Russian side, in the Zvezda service module, with the other based in the U.S. segment. There is also a toilet on the space shuttle, and depending on the situation, shuttle crews sometimes continue to use the facilities on the orbiter, even as they are docked to the orbiting complex.

And, just like toilets here on Earth, they require maintenance every so often.

According to Ed Van Cise, the station's Expedition 28 lead flight director, the station facilities need to be serviced approximately once a week to replace consumables, such as its solid waste container (urine on the station is recycled into drinkable water).

From a hardware standpoint, the urine hose requires the most frequent maintenance, needing to be switched approximately once a month, Van Cise said. Larger components have a longer lifespan, with maintenance required ranging from once every 70 days to once every year and a half.

Atlantis launched into orbit on July 8 and is flying a 13-day mission to the International Space Station. The shuttle is scheduled to land at NASA's Kennedy Space Center Florida on July 21, marking the official end of the agency's 30-year space shuttle program.

To commemorate the final flight, Mission Control has been sending some extra special wakeup calls to the Atlantis crew. This morning, astronauts got a wakeup call from singer Elton John, who dedicated his song "Rocket Man" to the spaceflyers.

NASA is retiring its orbiter fleet to focus on deep space exploration missions, such as to an asteroid or Mars.