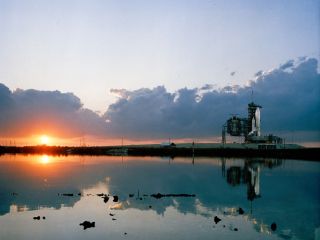 CAPE CANAVERAL, Fla. — NASA's planned Friday (July 8) launch of the space shuttle Atlantis will be the 135th and final liftoff for the iconic space program since its debut in 1981.

That works out to an average of 4.5 flights a year for the space shuttle program. While that figure is a far cry from the once-a-week frequency NASA predicted back in the early 1970s, the shuttle flew often enough to fundamentally change how humanity viewed and used space.

The shuttle opened space up to our species like no vehicle ever had before, and that — more than any single payload the shuttle lofted or science experiment it enabled — is probably the vehicle's greatest accomplishment, experts say.

"Low-Earth orbit has become a routine domain for human activities," said Roger Launius, space history curator at the Smithsonian's National Air and Space Museum. "And the shuttle did that more than anything else." [8 Surprising Space Shuttle Facts]

Showing what we can do in space

The Hubble Space Telescope and the International Space Station are two examples of humanity's growing proficiency in low-Earth orbit, and the shuttle program helped make both of them happen.

The shuttle Discovery deployed Hubble back in 1990 on its STS-31 mission. Within weeks, astronomers realized something was wrong; the instrument was returning disappointingly blurry images. Astronauts on Endeavour's STS-61 mission fixed the telescope in 1993, and multiple shuttle missions thereafter continued to repair and upgrade Hubble. [Infographic: Evolution of the Space Plane]

As a result, the telescope is still returning stunning images that have humanity rethinking the universe and our place in it.

"Without the shuttle, you would not have a functioning Hubble Space Telescope today," said space history expert Robert Pearlman, editor of the website collectSPACE.com and a SPACE.com contributor.

The shuttle has also been instrumental in building the International Space Station, the $100 billion orbiting lab that began construction in 1998 and is now just about complete. About 40 shuttle missions have lofted pieces of the station to low-Earth orbit over the years.

It's too soon to tell what the station's legacy will be, many experts say, but it has the potential to enable groundbreaking research in many fields, from biology and medicine to materials science. It's also an immensely complex structure whose assembly is a marvel of technological competence and international cooperation.

"I really think expanding human capability in space is the overarching achievement [of the shuttle program]," said Valerie Neal, curator for contemporary human spaceflight at the Smithsonian. "And I think both Hubble and the space station stand as representatives of that."

While the shuttle program expanded humanity's capabilities beyond our home planet, NASA's reusable space planes also opened up space in a different way: They democratized it to a degree, making the final frontier more accessible to a broader range of people.

In the early days of human spaceflight, NASA relied on high-flying military men, test pilots with nerves of steel such as Alan Shepard and Neil Armstrong. But when the shuttle came along, a much broader cross-section of people were able to ride a pillar of flame toward the heavens.

Many shuttle astronauts over the years have been scientists by training, for example — highly accomplished people, to be sure, but not folks who have devoted their lives to aerospace derring-do. And geriatrics could go to space on the shuttle, too: Ohio Sen. John Glenn flew on Discovery's STS-95 mission in 1998 when he was 77 years old. [Most Memorable Space Shuttle Missions]

"The shuttle basically redefined what 'the right stuff' was," Pearlman told SPACE.com.

This reframing of perceptions has likely had a profound effect on human spaceflight going forward, helping pave the way for the nascent space tourism industry, Neal said.

"I think the shuttle really opened up that possibility, mainly because it looked like an aircraft," Neal told SPACE.com. "It was a craft people could identify with, and they could imagine being comfortable riding in it."

The space shuttle was originally envisioned as a way to make human spaceflight cheap, reliable, frequent and safe. The vehicle certainly didn't deliver on that promise in full, but it was capable enough to allow humanity to establish a foothold, and some skills, in low-Earth orbit. And that, experts say, will likely be a big part of its legacy.