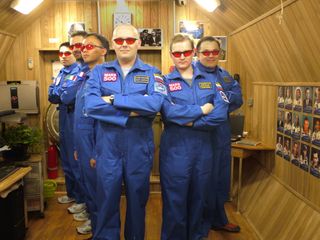 Six mock astronauts who are flying on a simulated trip to Mars and back without ever leaving Earth have passed the one-year mark of their 500-day mission, which keeps the crew isolated inside a pretend spaceship near Moscow.

The Russian Mars500 project hit the mock mission's milestone on June 3.  The ambitious simulation aims to recreate an entire trip to Mars in hopes of preparing future astronauts for the real journey, and assessing how humans cope with the long spaceflight that it would take to travel to and from the Red Planet. The European Space Agency and China are partners in the experiment.

The Mars500 project involves a crew of six volunteers – three Russians, two Europeans and one Chinese – who have been isolated from the rest of the world for more than 364 days. In recent letters home, the "astronauts" talked about the highlights of the trip, the monotony of their daily lives, their collective team spirit, and the determination to carry on. [Mars500: Photos From Russia's Mock Mars Mission]

"Wow, it's already been a year," Diego Urbina, one of the two Mars500 crewmembers from ESA, wrote in a recent diary entry. "One way to visualize it is if you think of what you were doing exactly one year ago, and then picture yourself living in a windowless metal box from then!"

Embarking on a mission to Mars

The $15 million Mars500 project "launched" on June 3, 2010, and even though the six-person crew never actually left Earth, according to the timeline of their virtual mission, they have already traveled to Mars and are now on their way home.

The facility where they remain isolated mimics every controllable aspect of an interplanetary flight. Their spacecraft is composed of four sealed interconnected cylinders with a total volume of about 19,420 cubic feet (550 cubic meters). [Video: One Year Down for Isolated Mars500 Crew]

The crewmates have their own private cabins and they live and work very much like the astronauts aboard the International Space Station.

"The dark side of this routine is that every day for the past year we woke up at the same time to do the same medical controls with the same devices: no weekend or holiday breaks for a year!" wrote Romain Charles, another ESA crewmember, in his diary.

Landing on the Red Planet

The crew arrived at Mars at the end of January. They simulated docking with a lander that was waiting in orbit around Mars, preloaded with vital supplies. In reality, another module was connected to their main habitation modules to perform this part of the mission.

After unloading the cargo, Urbina settled into the lander with crewmates Wang Yue and Alexandr Smoleevskiy, and proceeded to "land" on Mars.

The mock astronauts completed three outdoor excursions in Russian Orlan spacesuits, treading into a big hall that was built to look like the Martian surface. During these Marswalks, they collected rock samples, set up experiments and drove a rover, like real Martian explorers would.

The trio then flew back to their interplanetary ship and the crew was reunited on March 2 to begin their long trip back to Earth. The spacecraft is scheduled to "return" to Earth on Nov. 5, and the hatch of the isolation facility will finally be opened. After that, however, the mission will still go on for some weeks to complete medical checks and debriefings.

How to deal with a trip to Mars

A critical part of the Mars500 project is to examine the sociological and psychological effects of a mission to Mars. Project managers are interested in the human behaviors and interactions between the crewmembers on the journey. The elaborate Mars500 experiment is being run by the European Space Agency, Russia and China.

"Our crew has been keeping up the dozens of experiments we have to do constantly, no matter the good times or the hard times, producing data of quality that helps some of Europe's best scientists to evaluate what the space travelers of the future will go through," Urbina wrote.

"We still have five months ahead of us a lot of opportunities to make this trip to Mars even more special," Charles said. "We have a great crew and although our backgrounds are significantly different, we never had any conflicts between us. That's why I'm full of optimism for our last days in the Mars500 modules. We'll see you on the 5th of November when we'll land on Earth after our 520 day's journey to the Red Planet, not before!"