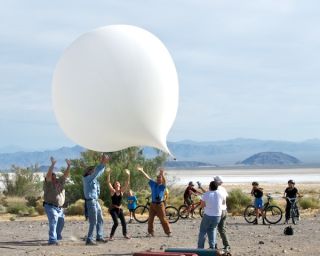 The first attempt to launch the DREAMS-11student balloon in April 2011 fell victim to gusty winds. Here, several scientists try to prevent the balloon from hitting the ground and bursting.
(Image: © Henry Bortman)

In April, NASA's Spaceward Bound project returned to Zzyzx, Calif., in the Mojave Desert with a single mission: launching a student balloon into Earth's stratosphere for Mars science.

Spaceward Bound brings together primary-grade science teachers with scientists to conduct astrobiology research in the field. It conducts several field campaigns each year, and the Mojave Desert is its most frequently visited site.

This time around, Spaceward Bound joined forces with the Columbus, Georgia–based DREAMS (Doing Research at Extreme Altitudes by Motivated Students) project. DREAMS involves middle- and high-school students, and on this occasion elementary-school students as well, in designing and building a set of scientific instruments that are carried aloft by a weather balloon literally to stratospheric heights.

This was the eleventh flight of the DREAMS platform and carried cameras and experiments to study conditions similar on the surface of Mars. Two years ago, DREAMS-8 was also launched from Zzyzx as part of Spaceward Bound. [Video: Student Balloon Sees Shuttle Launch]

Inside a stratospheric balloon

The DREAMS system consists of a large latex weather balloon, inflated with hydrogen to a diameter of about 10 feet, attached by nylon cord to two boxes full of scientific experiments, and then released into the atmosphere. Each box is about a cubic foot in volume, and the two boxes are suspended beneath the balloon, one below the other with a parachute between the balloon and boxes.

The balloon ascends, expanding as it rises into thinner and thinner atmosphere, driven in whatever direction the wind blows it, collecting data as it goes, until it reaches a height of 80,000 to 90,000 feet. At that point it bursts.

As the assemblage descends, the parachute eventually encounters thicker air and the payload drifts downward, to be recovered in a cross-country chase by a pack of enthusiastic students. The experiments are then brought back to the lab (or the classroom) and their results analyzed.

At least that's how it's supposed to work. DREAMS-11 hit a few snags.

On the first launch attempt, Luther Richardson, a high-school teacher from Columbus, Georgia, and the organizer of the DREAMS project; Rob Palassou, a fifth-grade teacher from Pleasanton, Calif.; several members of his school’s science club and a collection of various onlookers rose before dawn to prepare the balloon for its journey across the desert. Dawn in the Mojave is a good time for ballooning because the winds are generally calmer earlier in the day. [Video: Strange Craft in the Mojave Sky (They're Ours!)]

But there are always exceptions.

As Richardson and Palassou began to inflate the balloon, the wind picked up, gusting more and more strongly, tossing the balloon from side to side and requiring several people to jump into action, dancing around it with their arms in the air trying to keep it from hitting the ground, which would likely have caused it to burst. Truth be told, it was a pretty comic scene.

Except for the not-so-happy ending. Before the balloon could be attached to its payload, a particularly strong gust snapped the string (rated for fifty pounds of tension) holding it. It went sailing off, minus both scientific instruments and tracking equipment, to destinations unknown.

Fortunately, Richardson had a backup balloon.

The second launch attempt, the following morning, went better. The wind was calmer, the payload got attached, and the balloon launched according to plan. At which point three carloads of people, one containing teachers, the other two kids, took off into the desert in pursuit of the balloon, tracking its course on a laptop computer via amateur radio signals sent back by a custom-made C-dipole antenna built by high school students.

A fourth car, the advance team, had already headed out into the desert to the area where the balloon was expected, based on wind-speed calculations, to come down. They were hoping to "get a visual" on the balloon's descent.

Tracking went off without a hitch, if you don't count Richardson's car nearly running out of gas along the way, which required the hasty transfer of people and tracking equipment from one vehicle into the available free space in another. The cars went as far as they could on main roads, then turned off onto an unpaved fire road. The last leg of the journey required a mile-long cross-country hike.

Most DREAMS payloads include at least two cameras, one that looks downward, the other that looks out to the side. They're off-the-shelf compact digital cameras, but because of the height to which the balloon ascends, almost to the top of Earth's atmosphere, when they work they return stunning, satellite-like photos of the terrain the balloon traverses.

The DREAMS-11 payload also contained experiments related to Mars research. Part of what makes DREAMS a remarkable platform for doing science is that conditions in the upper atmosphere – very cold, high UV and very low air pressure – come quite close to conditions on the Martian surface.

By launching experiments on DREAMS, Mars-like conditions can be achieved for an hour or so, at low cost. There are few laboratories on Earth that can provide the same combination of temperature, air pressure and radiation as DREAMS, and they are expensive.

"It's cheaper to [launch DREAMS] than to find facilities that can recreate all of those environments – especially if you don’t have access to them," Richardson said.

One experiment was designed to observe the behavior of perchlorate salts under low-temperature, low-pressure conditions.

"The whole driver for the perchlorates is the fact that the Phoenix mission detected perchlorates in the soil and they didn't expect that. And so that opens up a whole range of implications for trying to find life on Mars. So we were trying to do some subtle recreations of that," Richardson said. NASA’s Phoenix mission landed in the northern polar region of Mars.

A series of vials containing various salts including perchlorate salts, some dissolved in water, some airtight, others open to the atmosphere, was flown on DREAMS-11. The vials were "watched" by a Flip digital-video camera. By combining information about temperature and air pressure from the onboard data logger with visual images of the behavior of the brines in the vials, students hoped to learn something about the anti-freeze properties of perchlorates.

It comes down to cables

Unfortunately, this experiment, as well as several others, fell victim to a problem that occurred at launch. Unexpected strain on the cords holding the two payload boxes together caused two of the cords to snap as the balloon was released. As a result, the power cable connecting the two halves of the payload jerked loose, cutting power to the data logger, cameras and heaters in the lower box.

Access to subfreezing temperatures is one of the benefits of the DREAMS platform. In this case, however, it was also its downfall. Cameras and data loggers run on batteries.

Batteries in extreme cold experience a great increase in internal resistance and stop producing adequate current to make anything work. When power was cut to the lower half of the payload during launch, some of the cameras stopped functioning immediately.

The Flip video camera worked for a while, but stopped when its battery froze at about 35,000 feet, before the critical phase of the perchlorate experiment took place.

The overall result: no data from the data logger, no images of Earth from space, and no useful data from the perchlorate experiment.

Richardson was disappointed by the lack of data, but that wasn't what he dwelt on. He focused instead on the value of the launch attempt as an engineering run. He was already thinking about how he was going to talk to his students about it.

"Taking this back, I can see where we're going to be able to look at that and say … if it has to be a single point of failure, then what can you do to make sure that it’s much more robust? … If that cable's going to be there, there better be serious strain relief." Or “maybe they move that power system into that second box, and just don’t borrow power [from the first box]." But "you increase mass if you start adding a second battery down there. And so [the students] have got to go through and make a trade study and debate that," he mused.