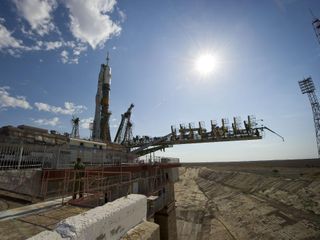 The Soyuz TMA-02M spacecraft is seen at the launch pad after being raised into vertical position on June 5, 2011, at the Baikonour Cosmodrome in Kazakhstan. The launch of the Soyuz spacecraft with Expedition 28 Soyuz commander Sergei Volkov of Russia, NASA flight engineer Mike Fossum and JAXA (Japan Aerospace Exploration Agency) flight engineer Satoshi Furukawa is scheduled for Tuesday, June 7, 2011.
(Image: © NASA/Carla Cioffi)

Three new crewmembers are set to launch to the International Space Station today (June 7) to begin their months-long mission at the orbiting outpost.

NASA astronaut Mike Fossum, Russian cosmonaut Sergei Volkov, and Satoshi Furukawa of the Japan Aerospace Exploration Agency (JAXA), will ride into orbit today aboard a Russian-built Soyuz spacecraft. The trio is slated to launch at 4:12 p.m. EDT (2012 GMT) from the Baikonour Cosmodrome in Kazakhstan.

"The State Commission approved our ship and crew for launch tomorrow night. Looks like we're going to do this!!" Fossum wrote via Twitter on Monday (June 6).

The three crewmates are launching less than a week after the successful completion of NASA's second-to-last space shuttle mission. The shuttle Endeavour landed at Kennedy Space Center in Florida on June 1 to end the orbiter's final flight before being retired. [Photos: Shuttle Endeavour's Last Landing]

Fossum, Volkov and Furukawa are set to begin their long-term stints aboard the space station, where they will make up the remainder of the station's Expedition 28 crew. The spaceflyers will join NASA astronaut Ron Garan and Russian cosmonauts Alexander Samokutyaev and Andrey Borisenko, who have been living and working at the space station since early April. [Amazing Photos by Astronaut Ron Garan]

The new crewmembers are scheduled to arrive at the space station on Thursday at 5:22 p.m. EDT (2122 GMT). They will be flying on a Russian-built Soyuz TMA-02M spacecraft, the second version of Russia's upgraded digital Soyuz capsule which has also been modified to fix computer console display glitches that popped up during the design's first flight.

In September, Garan, Samokutyaev and Borisenko will return to Earth, and Fossum will take command of the station to begin the next Expedition 29 mission.

As part of their stay at the orbiting laboratory, the crewmembers will conduct a variety of experiments in a number of fields, including physical sciences, human life sciences and Earth observation, according to NASA officials.

During Endeavour's STS-134 mission, the visiting shuttle astronauts performed four spacewalks and completed the last major stage of construction for the station's U.S. segment. This will allow NASA and its international partners to focus on the science and research capabilities that the station has to offer, NASA officials have said. [Amazing Spacewalk Photos: Shuttle Endeavour at Space Station]

"Now we’re moving out of that phase as this construction assembly’s complete, and more into the science phase that it was really built to do, so it’s exciting as we’re bringing online all of these, the payloads, the different equipment to begin moving it forward with that research capability," Fossum said in a preflight interview.

Fossum, 53, will be making his third spaceflight, having already logged more than 26 days in space. Fossum was previously a member of NASA's STS-121 and STS-124 missions to the International Space Station, both on the space shuttle Discovery.

Volkov, 38, spent 199 days in space during his first stint at the space station in 2008. He performed two spacewalks and served as commander of the space station's Expedition 17 mission. Volkov is a second-generation cosmonaut and was also the youngest station commander appointed to date.

Furukawa, 47, will be making his first spaceflight today after completing astronaut training in 2006 at NASA's Johnson Space Center in Houston. As a trained surgeon, Furukawa is looking forward to the scientific potential that the space station has to offer. [Video: Venomous Spiders on Space Station]

"Conducting many scientific experiments on board the space station, dedicating the progress of science and making everybody’s life on Earth better than now, that's my first interest," Furukawa said in a preflight interview. "Other than that, I would like to look at the beautiful Earth from some of the windows on board the station, and plus, I would like to take many photographs and share them with all."

In addition to their scientific duties, the Expedition 28 crew will also host the final mission of NASA's space shuttle program, the STS-135 flight of Atlantis, which is scheduled to launch in early July. Atlantis' flight will wrap up the agency's 30-year shuttle program, making way for NASA to focus on developing spacecraft to explore beyond low-Earth orbit.