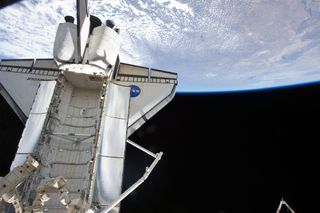 The docked space shuttle Endeavour is featured in this image photographed by an STS-134 crew member onboard the International Space Station on May 21, 2011 during flight Day 6 activities. Earth's horizon and the blackness of space provide the backdrop for the scene.
(Image: © NASA)

HOUSTON – The astronauts on NASA's shuttle Endeavour are more than halfway through their mission to the International Space Station, but there's still plenty of work to be done before they head home. Case in point: The astronauts took one last look at Endeavour's heat shield to be sure it was not dinged while in orbit.

The spaceflyers inspected Endeavour's wing edges and nose cap in preparation for their scheduled undocking from the station on Sunday (May 29). NASA engineers already cleared the shuttle's heat shield of any concerns related to launch debris, so the astronauts looked for any new dings since they've been in space. [Photos: Shuttle Endeavour's Final Mission]

For this final inspection, Endeavour's astronauts once again used the shuttle's 50-foot (15 meter) Orbital Boom Sensor System (OBSS), which is a long pole with cameras and laser sensors attached.

Since this is Endeavour's final mission before being retired, the inspection pole — which normally returns to Earth with the shuttle — will be left at the space station for use as an extension of the outpost's own robotic arm.

During the mission's fourth and final spacewalk on Friday (May 27), the OBSS will be installed on the starboard side of the space station's backbone-like truss. As a result, the shuttle crew scanned Endeavour's heat shield before leaving the station, rather than waiting until after undocking. [Inside and Out: The International Space Station]

NASA has kept a close eye on the health of space shuttles' heat shields since the 2003 shuttle Columbia disaster that killed seven astronauts. Since then, astronauts on every shuttle mission inspect their vehicle's heat shield several times to make sure the spacecraft is in good health.

Endeavour has a minor gouge on its belly and the shuttle astronauts took a second look at it last week to make sure it didn't pose a safety risk. Last Saturday (May 21), Mission Control declared Endeavour fit for landing.

After their shuttle survey today, Endeavour's crew will round out the day with a string of live media interviews, including a news conference with the space station crew, which is scheduled to begin at 5:42 a.m. EDT (0942 GMT).

The crew will also review procedures for Friday's spacewalk, which will be conducted by mission specialists Mike Fincke and Greg Chamitoff. To prepare for their work outside, the spacewalking duo will camp out overnight in the station's Quest airlock. [FAQ: How Do Astronauts Take Spacewalks?]

Fincke and Chamitoff will remain in the airlock overnight, where they will don masks to breathe in pure oxygen prior to going to sleep. The hatch to the Quest airlock will be closed and the pressure in the compartment will be lowered to help purge nitrogen from the spacewalkers' bloodstreams. This helps their bodies adjust for the spacewalk, and also makes them less susceptible to suffering from decompression sickness, which is know in common vernacular as "the bends."

Endeavour's STS-134 astronaut crew is currently flying a 16-day mission to deliver a $2 billion astrophysics experiment and other supplies to the International Space Station. It is the 25th and final flight of Endeavour before the shuttle is retired along with the rest of NASA's orbiter fleet later this year.