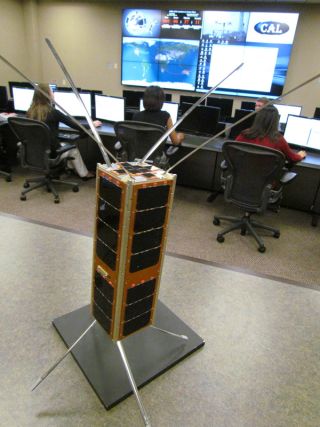 The SMDC-ONE is a 10-inch long, 10-pound satellite that is the first in a family of Army nanosatellites that SMDC/ARSTRAT engineers hope to launch as a new capability for the war fighter.
(Image: © Kari Hawkins/USAG Redstone )

HUNTSVILLE, Ala. — The United States Army is making a serious push to launch swarms of tiny, inexpensive spy satellites, which would serve as eyes and ears for soldiers on the ground.

The move is an attempt to adapt to the changing nature of warfare, which increasingly requires small bands of American soldiers to hunt down elusive targets in rough, isolated terrain, such as the craggy hills of Afghanistan. The new satellites could help reduce the difficulty and danger of such operations.

The first of these nanosatellites launched in December 2010, marking the first time an Army-built satellite made it to orbit since 1960. And many more could be coming soon, Army officials said. [Video: Defense Satellites to Watch Entire World - All the Time]

"We think you can put an awful lot of capability in a very small package," said John London, nanosatellite technology programs manager at the Army's Space and Missile Defense Command (SMDC). "We're moving down that road as quickly as we can."

The military already has an extensive system of reconnaissance satellites orbiting Earth. Most of them are large, expensive, highly capable craft developed by the Air Force, such as the recently launched $1.4 billion GEO-1 satellite.

Despite the abilities of these advanced satellites, London said, warfighters on the ground have a critical need for more accurate and up-to-date information. [Photos: Air Force's 2nd X-37B Space Plane]

To help meet this need for its soldiers, the Army is developing and testing a variety of different nanosatellites, whose low cost will enable them to be launched in large numbers. Together, the observational reach of these satellites would be considerable, and they'd be tough for adversaries to knock out.

While craft such as the GEO-1 present a tempting target, the new nanosats might not even be worth an adversaries' while. The tiny satellites should all cost less than $1 million each, and one of them, called SMDC-ONE, has a price tag of just $350,000. It's the size of a loaf of bread and weighs just 9 pounds (4 kilograms).

An SMDC-ONE launched for the first time on Dec. 8, 2010. The nanosat hitched a ride when the California company SpaceX put its Dragon capsule into orbit aboard a Falcon 9 rocket.

The little satellite performed well during its initial test flight in low-Earth orbit, which lasted for 35 days.

"It was a very successful mission for us," London said. "We were able to demonstrate military relevance."

SMDC-ONE doesn't take any photos; it's more of a communications tool. The Army envisions several possible uses for the nanosat, including relaying data from sensors in enemy territory back to bases.

At the moment, soldiers often have to perform this crucial task themselves, trekking to a position in the line of sight of the sensors. Such missions can expose the soldiers to danger and the sensors to discovery, London said. [Most Destructive Space Weapons Concept]

Another nanosatellite under development by the Army is called Kestrel Eye. This craft, which weighs 33 pounds (15 kg) and costs about $1 million, takes pictures with a resolution of about 5 feet (1.5 meters).

The Army hopes to test-fly a Kestrel Eye for the first time in 2012. A constellation of these little imaging satellites could make a huge difference for soldiers. The goal, London said, is to give warfighters the ability to request and receive pictures of their surroundings within one minute.

The Army is also developing a few other nanosats, whose first flights could take place a few more years down the road.

While big, expensive spy satellites typically operate for 15 to 20 years, the Army is designing its nanosats to operate for two years or so. Newer models will be launched when the old ones fizzle out or become obsolete, allowing the Army to take advantage of technology's rapid march.

The little satellites will be put into low-Earth orbits that decay within five to seven years, London said. So the craft should burn up in Earth's atmosphere relatively soon, rather than add to the growing space debris problem over the long haul.

Putting large constellations of satellites up, and refreshing them frequently, will require a great many launches. Therefore, those launches must be cheap — $1 million or less, London said. That's not possible with current launch vehicles, which typically cost tens of millions of dollars at a minimum.

Various private companies, including the Hunstville-based Dynetics, are working on developing cheap, reliable "nanomissiles," and London expressed optimism that such a rocket isn't too far in the future.

So Army soldiers could soon have access to an unprecedented amount of valuable information, in nearly real time.

"That's really what it's all about — getting data into the hands of the soldiers who need it, when they need it," London said.