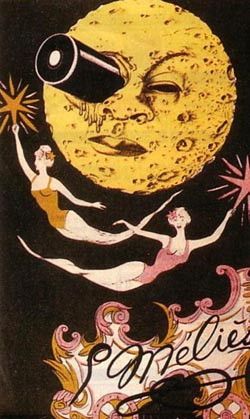 Theatrical poster for the Georges Méliès film, A Trip to the Moon, a sci-fi epic that in 1902 thrilled moviegoers.
(Image: © Technicolor)

NASA's Apollo astronauts may have first put boot prints on the moon in 1969, but moviegoers made the roundtrip long before that — in fact, way back in 1902.

Thanks to innovative French filmmaker, Georges Méliès, a pioneer of early cinema and special effects, audiences were transported across the intervening void to the moon. His 14-minute silent film, "A Trip to the Moon (Le Voyage Dans La Lune)," was arguably the "2001: Space Odyssey" of its time.

The film portrays members of the Astronomers' Club, dispatched on an expedition to the moon. Their mode of propulsion — a huge cannon — borrowed from French novelist Jules Verne's space adventure "From the Earth to the Moon," which was published in 1865.

The film shows the intrepid travelers arriving on the moon safe and sound, only to encounter the Selenites. They escape the clutches of the Selenite king and hustle back to Earth in their bullet-shaped vehicle.

Landing in the ocean, the explorers are fished out by a sailor. All this is followed by cheers, decorations and a victorious parade for the six conquerors of the cosmos. ['Transformers' Film Trailer Rewrites Apollo History]

Now, rocket ahead 109 years. A restored color version of the classic film is wowing theater patrons again, this time at the upscale Cannes Film Festival running May 11 to May 22 on the French Riviera.

When it was first released, Méliès' "A Trip to the Moon" was both in black and white, as well as a hand-tinted color version.

The color adaptation was thought to be long lost. But a colorized print of the film was recovered in Barcelona, Spain, about 18 years ago.

On close examination, it became painfully obvious that time had not treated the nitrate print well. It was severely damaged and in such poor condition that refurbishment of the film looked impractical.

Brought to bear were state-of-the-art digital technologies, with the fragments of the 13,375 frames reassembled and painstakingly restored, one by one, to create a fully reinstated color version of the film.

Handling the damaged color print was not easy. It involved peeling off and unrolling the nitrate prints to be able to digitize them. That effort took two years, and images were stored on a hard drive for eight years.

The digital color restoration of "A Trip to the Moon" took place at Technicolor's laboratories in Los Angeles, under the watchful eye of Tom Burton, executive director of restoration services at the company.

According to a statement from Technicolor, the objective now is to circulate the film to the largest audience possible.

Back in 1902, at the time of its first release, "A Trip to the Moon" was screened with a musician on stage playing "popular music," as described in the film reviews of the era.

For that purpose, the French band Air composed an original soundtrack to accompany the silent film. That inventive musical duo has among their credits the critically acclaimed album "Moon Safari."

Explains Air musician, Nicolas Godin: "'A Trip to the Moon' is undoubtedly more organic than most of our past projects. We wanted it to sound 'handmade,' knocked together, a bit like Méliès' special effects. Everything is played live … like Méliès' film, our soundtrack is nourished by living art."