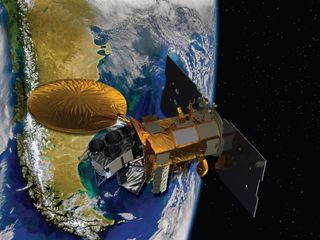 Artist's concept of the Aquarius/SAC-D spacecraft, a satellite designed to study the salt levels in Earth's oceans.
(Image: © NASA)

NASA is preparing a sophisticated new observatory, designed to study the relationship between the saltiness of Earth's oceans and the planet's climate, for its launch into orbit next month.

The Earth-observing Aquarius/SAC-D mission will measure the salt levels, or salinity, of the ocean surface, and the subsequent interactions between ocean circulation, the water cycle and other drivers of the planet's climate.

"It's really going to be a great leap forward for the science of oceanography," Eric Lindstrom, Aquarius program scientist at NASA Headquarters in Washington, D.C. said in a briefing Tuesday (May 17). "We have, in the Earth science division, 13 missions on orbit now. A key missing piece, in demand by the ocean science community, is salinity. This determines the density of surface water of the ocean, and density variations and wind drive ocean circulation. This is why we want to get this missing piece." [Video: Orbital Salt Sniffer to Sample Seven Seas]

The $287 million Aquarius satellite is set to launch June 9 atop a Delta 2 rocket from Vandenberg Air Force Base on the central coast of California.

As the observatory orbits 408 miles (657 kilometers) above Earth, it will continuously take measurements on the concentration of dissolved salt at the ocean surface within a swath that is nearly 250 miles (400 km) wide per orbit.

Every seven days, Aquarius will obtain enough data to be compiled into a complete and global map of ocean salinity. These observations will help reveal how salinity changes over time and from one part of the ocean to another. [Video: Sea Salt Changes Ripple Around the World]

Other instruments onboard the satellite will simultaneously collect other data, such as measurements of ocean surface winds, over the entire surface of the Earth.

Aquarius will use a set of highly precise microwave radiometers to detect microwave emissions from the ocean surface. These emissions are modulated, or changed, based on the electrical conductivity of the water itself, which is influenced by the salinity. [The World's Biggest Oceans and Seas]

By tracking variations in ocean surface salinity, Aquarius will monitor changes in the water cycle caused by evaporation and precipitation over the ocean, river runoff, and the freezing and melting of sea ice.

"Salinity is the glue that bonds two major components of Earth's complex climate system: ocean circulation and the global water cycle," Lagerloef said. "Aquarius will map global variations in salinity in unprecedented detail, leading to new discoveries that will improve our ability to predict future climate."

The observatory will carry seven other instruments that will collect environmental data for a wide range of applications, including studies of air quality and land processes.

The Aquarius/SAC-D mission, which has an expected lifetime of at least three years, is a collaboration between NASA and Argentina's space agency, Comision Nacional de Actividades Espaciales (CONAE). The project also features international participation from Brazil, Canada, France and Italy.