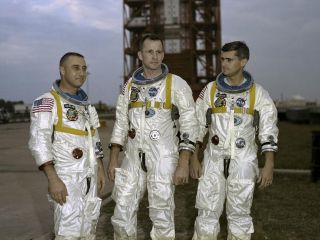 Since the age of human spaceflight began 50 years ago, space missions have led in the accidental deaths of 21 explorers, some American astronauts and others Russian cosmonauts, while inside their spacecraft.

The most recent human spaceflight disaster, which occurred in 2003 at the end the space shuttle Columbia's STS-107 mission, caused NASA to ground its shuttle program for more than two years to make safety improvements.

Here's a look at the men and women who have lost their lives on space missions:

What happened: During a launch-sequence rehearsal for NASA's Apollo 1 mission, the cabin was filled with pure oxygen as part of its environmental control system. An electrical fault sparked a flash fire in the cabin.

The fire spread quickly in the pure oxygen atmosphere, suffocating all three Apollo 1 crew members through smoke inhalation. The launch pad test site was renamed Apollo 1 in honor of the crew, and the accident led to major design and engineering modifications as well as revisions to test planning operations and manufacturing procedures. [The Dangers of Human Spaceflight (Infographic)]

After the Soyuz module re-entered the atmosphere April 24, its parachute did not open properly, causing it to crash to Earth at almost full speed. Cosmonaut Vladimir Komarov died on impact.

What happened: Soyuz 11 launched on June 6, 1971, and docked with the space station Salyut 1 for a three-week stay.

While the actual station mission was a success, when the Soyuz 11 vehicle undocked, a valve on accidentally opened, causing a pressure leak in the cabin.

The three cosmonauts were killed as the capsule depressurized during preparations for atmospheric re-entry on June 30. The malfunctioning valve was discovered only when the module was opened by a recovery team.

What happened: During the space shuttle Challenger's 10th mission, STS-51-L, the spacecraft broke apart 73 seconds after launching from the Kennedy Space Center in Florida. All seven astronauts aboard were killed, including Christa McAuliffe, a New Hampshire high school teacher tapped to be the first teacher in space.

President Ronald Reagan formed the Rogers Commission to investigate the accident and space shuttle missions were grounded, pending the review. The commission's analysis concluded the Challenger accident had been caused by the failure of an O-ring seal on one of the solid rocket boosters due to extremely cold weather before launch. [Photos: Challenger Shuttle Accident]

The Challenger disaster forced NASA to halt all space shuttle launches for 32 months to recover from the accident.

What happened: At the end of its 16-day mission, the space shuttle Columbia disintegrated as it re-entered the Earth's atmosphere over west Texas, killing the seven-person crew.

The accident was later determined to have been caused by damage that had occurred during liftoff, when a chunk of insulating foam broke off from the external tank and hit the orbiter's left wing. The structural failure of the shuttle's leading wing ultimately resulted in the spacecraft breaking apart.

All of NASA's space shuttle program was grounded for 29 months following the disaster.

This article was provided by Life’s Little Mysteries, a sister site to Space.com.