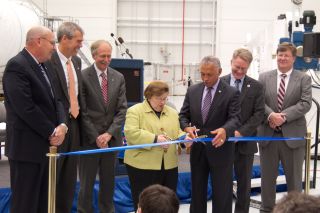 NASA has unveiled a new facility to help ready commercial rockets for launch, and the first work at the new site should begin this month in preparation for a test flight to the International Space Station later this year.

The facility is six stories tall, about 250 feet (76 meters) long and 150 feet (49 m) wide. Medium-class rockets with multiple stages will be assembled at the HIF, then rolled out for launch at a nearby Wallops pad.

NASA's first customer for the new rocket facility is Virginia-based Orbital Sciences, which will use the new building to assemble its Taurus 2 rocket — a vehicle that is expected to begin launching supply runs to the space station for NASA in 2012.

"The Horizontal Integration Facility is a vital part of our operation at the Wallops Flight Facility," Dave Thompson, chairman and CEO of Orbital Sciences, said in a statement. "The capability it provides to process two Taurus 2 vehicles simultaneously puts us in an excellent position to support NASA with missions to the International Space Station."

Putting together the Taurus 2

In 2008, Orbital Sciences scored a $1.9 billion contract with NASA to help resupply the space station after the agency's space shuttle fleet retires later this year. The company will make eight supply flights with a system comprised of its two-stage Taurus 2 rocket and Cygnus capsule. [Infographic: Orbital's Cygnus Spaceship, Taurus 2 Rocket]

The different stages of the Taurus 2 will be lined up and put together at the cavernous HIF. Multiple rockets can be processed in its bay at the same time, using several huge cranes.

"It's a big facility," said Wallops director Bill Wrobell. "At this point, you could probably fit two to three Taurus 2 vehicles in there."

After a Cygnus vehicle is attached to its finished Taurus 2 booster, the rocket-capsule stack will be wheeled over to a launchpad at Wallops, where it will be hoisted into vertical position for launch.

Integration work will begin at the HIF in the next week or so, and the first Taurus 2-Cygnus test flight—which will be a trip to the space station—should take place later this year, NASA officials said.

Open to other customers

The Wallops HIF is one of just a handful of such facilities around the country, Wrobell said. Comparable facilities exist at Cape Canaveral Air Force Station in Florida and Vandenberg Air Force Base in California, for example, but overall there aren't many places equipped to put big rockets together, he added.

So the Wallops facility is open to serving other customers in the private spaceflight industry — and the interest appears to be mutual.

"We've certainly had visitors come in from a number of different places," Wrobell told SPACE.com. "But it's tough to gauge how serious that really is."

Wallops, which is run by NASA's Goddard Space Flight Center, has been launching rockets since 1945, and it does a lot of research and development work for the space agency. In fact, it takes the lead in managing and implementing NASA's suborbital research program, according to agency officials.

But with the opening of the HIF, Wallops could assume another role as well — helping to spur the expansion of commercial spaceflight capabilities. This is a key priority of NASA, as the space agency looks to hand off near-Earth operations to private companies so it can focus on sending humans to asteroids by 2025 and Mars by the 2030s.

"Interest in commercial space in general has picked up again, and that's a great thing to have happen," Wrobell said. "And, obviously, it's great to be a part of that."