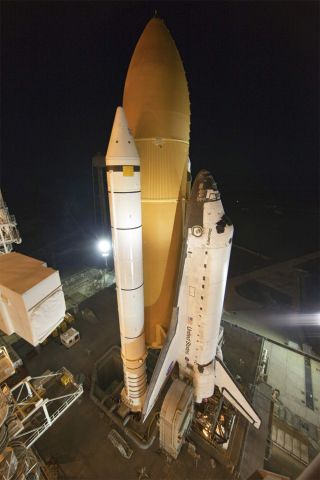 Space shuttle Discovery, secured to a crawler-transporter, slowly moves away from Launch Pad 39A at NASA's Kennedy Space Center in Florida, on its way to the Vehicle Assembly Building for repairs to its external fuel tank.
(Image: © NASA)

NASA has officially set a launch date of June 28 for the very last space shuttle flight.

The mission will be the third shuttle flight of 2011 and was authorized last year by Congress, though NASA has not yet received the funding appropriated for the trip. Called STS-135, the mission will be flown by space shuttle Atlantis before it and NASA's two other orbiters, Discovery and Endeavour, are retired for good.

The shuttle Discovery is scheduled to make its final launch on Feb. 24 to deliver a new room, robot and supplies to the International Space Station. Endeavour will follow on April 19, if NASA's current flight schedule holds, to add a billion-dollar astrophysics experiment to the station.

NASA is targeting a 3:48 p.m. EDT (1948 GMT) launch time for the final voyage of Atlantis. The spare parts and supplies it will deliver are expected to help the space station continue operations through 2020.

After NASA's shuttles are retired, astronauts headed to the station will have to rely on Russia's Soyuz spacecraft for transportation. Fresh supplies will be delivered by unmanned Russian, European, Japanese and possibly U.S. commercial spacecraft.

Atlantis' mission, which will be the 135th space shuttle flight, will carry four astronauts and a host of cargo to the station.

Shuttle commander Christopher Ferguson will lead veteran astronauts Douglas Hurley, Sandra Magnus, and Rex Walheim on the trip, which will also include one spacewalk. When the shuttle returns, it will bring back a broken ammonia coolant pump that failed on the station last year.

Discovery's flight has been held up since last November because of cracks discovered on its external fuel tank. [Photos: Building Space Shuttle Discovery]

Repairs to the tank are ongoing inside the huge Vehicle Assembly Building at NASA's Kennedy Space Center in Cape Canaveral, Fla. As of today, technicians have completed fixes on 61 of 94 support beams, called stringers, on the massive orange tank.

Atlantis' STS-135 flight was approved in the NASA Authorization Act passed by Congress, and signed by President Obama, last October. But funding for the extra shuttle flight must be appropriated in a 2011 budget, which Congress has not yet passed.

Instead, the country is operating under a stopgap budget measure, known as a continuing resolution, until March.

There are also some worries that the same problems that plague Discovery's external tank will trouble Atlantis' tank, too, requiring similar repairs.

NASA's space shuttle program has been launching missions into low-Earth orbit since April 12, 1981, when the Columbia orbiter blasted off on the first shuttle flight – STS-1.