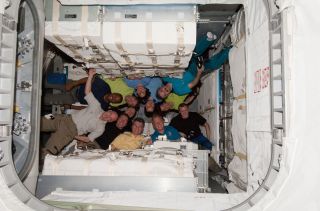 HOUSTON – It may not be spring quite yet, but the astronauts of the space shuttle Discovery are doing their own type of spring cleaning and repairs on the International Space Station today (March 5).

Discovery has been linked to the space station for an entire week as the two space crews, 12 astronauts in all, worked together to add a new room, robot and spare parts to the orbiting lab. [Photos: Final Flight of Shuttle Discovery]

Today, Discovery astronaut Mike Barratt will team up with space station resident and European Space Agency astronaut Paolo Nespoli for one of the crews' main tasks: fixing part of an air-scrubbing system in the U.S. Destiny Laboratory. This system, called the Carbon Dioxide Removal Assembly (CDRA), filters breathable air through the station by removing carbon dioxide.

"We've narrowed that down to what's essentially a short in the heater beds," Renfrew said in a briefing yesterday (March 4). "It sucks air into the CDRA and uses heating processes to bake out the CO2. One of those heater pads apparently has a short in it and we're going to operate on that heater pad."

Mission specialists Steve Bowen and Alvin Drew will spend some time in the station's Quest airlock, where the suits they wore for their two spacewalks are being stored. Bowen and Drew will start packing up these spacesuits in preparation for their return to Earth. [Inside and Out: The International Space Station]

The other astronauts, meanwhile, will continue transferring cargo out of the station's new storage module – the Permanent Multipurpose Module – which was delivered by Discovery's crew. They will also retrieve supplies out of the HTV-2, an unmanned Japanese cargo ship that is currently docked at the station. Some of these supplies will be reorganized and tucked away in the closet-like storage module.

On Thursday (March 3), the shuttle and station crews received a phone call from President Obama, who joked with the astronauts about their newest crewmember: the humanoid robot Robonaut 2, or R2 for short.

Robonaut 2 rode aboard Discovery to the International Space Station inside the storage module. The dexterous robot was recently taken out of the module, but still remains packed in its foam case.

And while the robot will not be fully unpacked during Discovery's visit to the station, it could meet its new station crewmembers earlier than originally scheduled.

NASA is now planning to unpack Robonaut 2 earlier than planned, with its activation slated for sometime between March 10 and March 28. This is because mission planners would like to dispose of all the foam used to pack Robonaut 2 on the HTV-2 spacecraft, which will be intentionally released from the station on March 28 to burn up in the Earth's atmosphere.

Discovery's 13-day STS-133 mission will be the shuttle's last before being retired from service after 39 trips into space, including 13 visits to the International Space Station. NASA is retiring its 30-year space shuttle program later this year, with only two more flight remaining – one each for shuttles Endeavour and Atlantis – planned.

Discovery launched toward the space station on Feb. 24 and is due to undock from the orbiting lab on Monday, March 7. The shuttle is due to land at NASA's Kennedy Space Center in Florida on Wednesday, March 9.